Posted by Prayingmedic at 8:00 AM No comments:

This is the testimony of Mickey Robinson as told to Patricia King. Since his death and resurrection after an airplane crash, he's experienced the supernatural life with an intensity few others have seen. Today he is a gifted teacher and prophet. Mickey's website can be found here.
Posted by Prayingmedic at 5:55 AM 1 comment:

Does God Cause Sickness?

Ready to kill a few sacred cows?
In our first video, Bill Johnson answers a couple of questions; the main one being, does God cause sickness? Leif Hetland and Rand Clark are also present on the platform.

In our second video Andrew Womack challenges traditional teaching on the nature of God and why tragedies happen. Andrew often provokes me to reconsider my beliefs, some of which are more traditions of men, than eternal truths.

Posted by Prayingmedic at 8:16 AM No comments:

What do medics do for amusement on a long, boring shift when nobody wants a ride to the hospital?
Some of them make movies.
Steven Spielberg's job is safe. And I'm no Darren Wilson. But I had a desire to create videos that show people healing in every day situations. This is a short video in which two strangers meet and have an Xtranormal conversation. Our healer receives a few words of knowledge and begins building a bridge of relationship. The words of knowledge surprise the woman, forcing her to consider that this guy is getting information from a higher power. When she feels power going into her body, she now has evidence that something supernatural is happening. The woman perceives healing as an act of compassion; revealing the heart of the man who prays and a God who heals out of love. Having built a safe environment for the relationship, she wants to know more about the God who made it happen. The healer can now discuss the kingdom of God with her.

Let me know what you think.

Email ThisBlogThis!Share to TwitterShare to FacebookShare to Pinterest
Labels: word of knowledge, xtranormal

This video shows some of the young Christians in northern California bringing the healing power of God to the Shasta Mall. Words of knowledge are involved, revealing medical conditions that aren't obvious.


I love what God is doing at Bethel Church, in Redding California. Follow the link below to watch an edited video of a service in which many people were healed. You can view this video without registering. If you want to view other videos, you will need to register for a free membership.
iBethel.TV // Bethel Church // Oct 11th Healing service : Dec 02 '09
Posted by Prayingmedic at 6:22 AM No comments:

This article was first published by KLTV 7 News in Tyler, Texas. The original article can be found here

It's hard to see anything different today in little 11 year old Kayla Knight.

It was just three weeks...three weeks ago that doctors told Amy her little girl had a tumor that cover almost a quarter of her brain.

"I think it was like being in another world. Because I just stood there. I mean it literally took him... Amy, Amy because I thought... You just don't believe it," remembers Kayla's mother Amy Knight.

For months Kayla had been having severe headaches. The frequency and severity kept growing until one night in May they became so unbearable they went to the E. R. Doctors said an x-ray showed some kind of abnormality in Kayla's head. It would take another month before Kayla could get in to see a doctor in . They took an MRI, which showed a large white spot on Kayla's brain. A tumor that doctors feared was spreading quickly around Kayla's brain.

"We prayed," said Amy. "We both hit our knees and we were praying. That was actually on a Wednesday so when we got to church we had a good 30 people or more lay hands on her and it just.... you could feel God. I can't say we prayed as much before. I mean we did...but not like this. Not like we do now."

Two days later Kayla was sent to in . Same routine. Another MRI. But this time...

"I don't know how to read it so I was okay...to me it looked like it had expanded because all you see in the picture is nothing. So I thought okay maybe its just taken over the whole brain. And he said no, it gone. And he said its got to be a mistake, it has to be. We are going to schedule another test, there is no way its just gone and just the whole time he is stuttering and there is just this look on his face like I don't understand. I don't know. We did another one and it was gone and his words were it was truly a miracle, this has to be the act of God," said Amy.

In just 48 hours all that this single mom had known was turned upside and back again. Just yesterday they went for another follow and still no signs of the tumor. But there are plenty of signs say Amy, of the power of prayer. That not only saved Kayla but changed this family forever.

"I don't know because I'm 30 years old and I just come to grips with that a couple of months ago and I have never been as comfortable in my faith as I am right now. And I think I have a lot of people standing behind me. Its hard to explain, I just know whatever happens to me apparently God wanted it to happen or it would not happen in the first place. I know He is in control of our lives," says Amy

"Well its been kind of scary but kind of fun. Because your like knowing God is going to do something about it," says Kayla

"The best way to describe it, I was a mediocre Christian. To be honest. I mean I went to church, the mundane thing. You do this and you do that and you think okay I'm going to heaven. Looking back now I don't know that I would have. I know I will now. I know this has opened my eyes and I think maybe God used that to make us better believers. To make us fully depend on Him. I mean that's what its all about anyway," says Kayla.

Posted by Prayingmedic at 6:00 AM No comments: 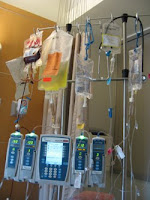 She spoke little English. But with a heart rate around 40 and a B/P in the 50's, I'm surprised she was awake. Her potassium was critical. The normal range is 3.5 to 5. Hers was nearly 7. Hyperkalemia is a silent killer. It usually comes from kidney failure, but she had no history of it. Nurses frantically did what they could to keep her alive. I was taking her some place bigger. A place where they have dialysis; her only hope.
That...and prayer.
So I prayed on the way and spoke healing into a body gone mad. I kept an eye on the pumps and watched her vitals, which steadily improved. When we dropped her off in the ICU, her heart rate was clipping along around 100. Their first B/P was 118/ 70.
And that was amazing.
It might have been the anointing.
It could have been the dopamine.
I'll let you decide.
Posted by Prayingmedic at 7:00 AM

Email ThisBlogThis!Share to TwitterShare to FacebookShare to Pinterest
Labels: hyperkalemia

Healed Heart & A Word of Knowledge

Happy St. Patrick's day!
This would make a great valentine's day post.
Oh well.
If you haven't noticed, we're in a season of new things. Some are painful. I was on duty yesterday getting lunch at a deli. I felt a sudden pain in the first knuckle of my middle finger I've never had before, so I wondered if it might be a word of knowledge for healing. I asked the person closest to me if they had pain in their hands, but they said no.
I got in the rig and told my partner about it. He shot me a puzzled look and asked, "where's your pain?" I repeated, "first knuckle, middle finger." He smiled and said he's been having terrible pain in that exact spot for a week - ever since our last shift. The pain woke him up this morning. So I put my hand over his and commanded healing into the joint. He felt a tingling sensation like pins and needles. A little while later he was pain-free. To someone who has words of knowledge like this often, it might not be a big thing - but to me it's a major breakthrough. I've been wondering for a long time if I'd ever feel the pain of a friend as a sign that God wants to heal them.
My wife had an episode of tachycardia two nights ago. She was sitting at the computer when it started. Suddenly, her heart began beating about 150 times a minute. She's had PSVT for many years. I felt her pulse to confirm it. We decided to pray for healing. I put my hand over her heart and spoke healing into her. I asked for a new heart. Within a few minutes her rate was back to normal.

No bearing down or holding her breath. No drugs. It just returned to normal as we prayed. We'll have to wait to know if she was healed permanently. We're trusting in God for that.
Posted by Prayingmedic at 9:28 AM

Raised From The Dead in Africa

This is part of the film The Finger of God, by Darren Wilson. After the short discussion on preaching the gospel, we hear the testimony of a man named Francis, who was brutally beaten to death. At the hospital he was resurrected and healed of his injuries. Heidi Baker and Bill Johnson discuss miracles of healing following his story. If you haven't seen the entire movie, I strongly suggest buying copy. (Or two) After you see it, you may want to give a copy to a friend.
Posted by Prayingmedic at 5:30 AM

Healing From Intimacy With God

Bill Johnson teaches on healing out of intimacy with God.
Posted by Prayingmedic at 11:48 AM No comments:

Professor Hermilo Jasso took 30 college students to China. He became ill and was admitted to a Chinese hospital with a ruptured appendix. God sent two mysterious strangers to get him the help he needed.

Posted by Prayingmedic at 6:00 AM No comments:

Back From Death After Fatal Pulmonary Embolism

This video is the testimony of a woman who suffered cardiac arrest from a pulmonary embolism. The ER doctor testifies of a two -hour resuscitation attempt, which failed. One of the nurses involved tells of her part in the resuscitation. While hospital staff worked to bring her back to life, her church interceded for her. Friends and family visited the ER and prayed at her bedside. After the decision had been made to stop resuscitation, she came back to life. Within hours, she regained full neurological function.


Posted by Prayingmedic at 6:44 AM No comments: