My wife and I were entertaining friends when we got on the subject of writing books. I told our guest I was not the best healer in the world. "If you want to see a really gifted healer," I said, "Go hang out with David Hogan."

I'm not the most knowledgeable or the most proficient healer, but with the little knowledge I do have, I was able to write a decent book on the subject, because in all honesty—I'm probably a better writer than I am a healer. There's still so much about healing I don't understand. Sometimes I feel unworthy of the questions people ask me. That night I had a dream:
In the dream, I was taking care of patients with a strange medical condition I didn't know anything about. They had this fluid in some kind of container that was somehow attached to their body. I was supposed to monitor this fluid. I didn't know what the fluid was and I didn't know how to monitor it. I felt very uncertain about how I was supposed to take care of these patients. So I did the best I could and tried to make sure nothing bad happened to them while they were in my care. At the end of the dream, I was given an award for providing excellent care for my patients. That was the end of the dream.

When I awoke, I was a little shocked. How could anyone give me an award for providing good patient care when I had no clue what was wrong with my patients, what that fluid was, or how I was supposed to monitor it?
It didn't make sense.
Later that day, as I thought about the dream, I also thought about the book I wrote and how I still don't have all the answers to the questions people have about healing. And then it dawned on me what the Lord was saying in the dream. (This is a word of instruction for all of us):
It doesn't matter to God if you have things all figured out. It doesn't matter if you can answer people's questions correctly. It doesn't matter if you feel pretty clueless about healing or deliverance, or anything else He's asked you to do. It doesn't matter if you feel incompetent or incapable. What matters to God is that you do the best you can with the little information and talent you have.
Be a good steward of what resources and knowledge He's given you and He'll fill in the gaps of your knowledge and skill. Excellence doesn't require complete understanding. All it requires is diligence and a sincere desire to serve in whatever way you can.
Posted by Prayingmedic at 8:00 AM No comments:

This is an except from my latest book American Sniper: Lessons in Spiritual Warfare.

The main character of American Sniper is a Texas-born redneck named Chris Kyle. The film opens with a scene of Kyle perched on a rooftop in the city of Fallujah, Iraq. U.S. troops have been told that the city was ordered to be evacuated and any military-aged men they find are assumed to be enemy combatants, until proven otherwise. Kyle is checking out the path of a U.S. military convoy through the scope of his sniper rifle. He sees a man on a rooftop in the distance talking on a cell phone. The man appears to be watching the convoy, which Kyle reports to his command through his headset. The man then disappears from the rooftop and a few moments later, a woman and a young boy exit the doorway of the same building and begin walking toward the convoy. Kyle reports the woman and boy to command, and notes that the woman is not swinging her arms as she walks and that she appears to be carrying something. Kyle watches through the scope as the woman removes something from her cloak and hands it to the boy and he realizes it’s a grenade. He reports what he sees and again gets the green light to shoot, but his marine guard warns him that he’ll be sent to prison for shooting a child if he's wrong. The film then cuts away and the next 20 minutes are vignettes of Kyle growing up as the son of a religious father who stressed the ever-present threat of evil, the virtues of aggression, and the supremacy of the hunt.

As a child, Chris learned to watch over his younger brother, Jeff. When someone picked on him, Chris came to his defense and in one scene, he gave the bully a beating he wouldn’t forget. As an adult, he spent most of his time riding bulls, drinking beer, chasing pretty girls and getting into fights.  In the same way that Chris drifted from one misadventure to another, many Christians find themselves drifting, spiritually. We go to church on Sunday, read our Bibles, and try to avoid getting into trouble, but inevitably, trouble seems to find us. We wrestle with various problems and seem to make little progress, no matter what measures we try.

The first seven years of my life as a Christian I traveled down a dozen different paths leading nowhere. Though I felt at the time I was a passionate believer, I had very few victories over the enemy. I lost more spiritual battles than I won. And perhaps more importantly, I never felt a great sense of significance; I felt like I was just another believer. In many ways I was drifting spiritually, with no real course or destination in mind, other than getting into heaven when I died.

No child dreams of growing up to be insignificant. We all want to do something great. God doesn’t create us to be ordinary. He’s placed a desire for significance in our hearts—a desire to do something to change the world for the better. It’s apparent early in the film that Chris Kyle knew he was destined to do something extraordinary.

The film cuts away to a scene of Chris and his brother watching TV. They saw the news of the terrorist attacks on the U.S. embassies in Tanzania and Kenya. Chris was infuriated that U.S. citizens were being attacked and felt compelled to do something about it. His anger over the attacks compelled him to visit a Navy recruiter’s office. The recruiter suggested he might be interested in the SEAL program and handed him a pamphlet, but Kyle remarked that he wasn’t much of a swimmer. The recruiter took the pamphlet out of his hand and said it wasn’t for most men. Kyle grabbed the pamphlet back and proudly replied “I’m not most men.” He didn’t envision himself in a routine job as a sailor. That would be too safe. He set his aim high and endured the brutality of Navy SEAL training.

Dream
In the dream, I drove my car to a pawn shop with my children. I took some old things that I owned into the pawn shop and traded them in for a strange type of handgun. My kids waited a long time for me to come out. I left the shop with my new gun, but didn’t want my kids to see it, so I walked around behind my car, then took it out and examined it. The gun had a laser sight built into it. It was wide, with a round bulge that seemed to be for the ammunition, though it wasn’t a revolver and it didn’t have a magazine. I didn’t know how the ammunition was loaded. I began trying to figure out how it worked and decided to aim it across the street at a vacant lot. The gun fired two rounds, which I wouldn’t have known, except that I saw puffs of dust rise from the ground where I pointed the gun. It made no sound and didn’t seem to have a trigger, but seemed to fire by my thoughts. I put it in the trunk of my car and that was the end of the dream.

InterpretationIn the dream, I traded in a bunch of things I had obtained from the world for a new, spiritual weapon. I believe this speaks of acquiring a new way of thinking and living. I had to leave behind the way of thinking I had acquired from the world and learn the way of thinking used in the kingdom of God. I also had to learn how to defend myself and wage an offensive attack differently. I had no idea how my new gun fired. I didn’t yet understand how spiritual weapons operate, though I had obtained one that could be used effectively, once I was trained to use it.

You can read more by clicking the link to American Sniper: Lessons in Spiritual Warfare, or click on the image below. 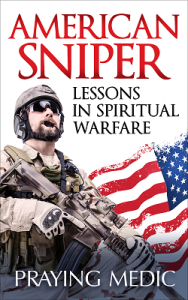 Posted by Prayingmedic at 8:00 AM No comments: