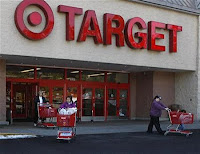 My daughter and I have a Saturday ritual. We check what’s left in the pantry and refrigerator and make a pilgrimage to Costco to re-stock. We always stop at a second store to get a few things we can’t get a Costco. This Saturday we stopped at Target.

We picked up a few things and were cruising the aisles, when my daughter said, “Hey dad, did you see the lady with the leg immobilizer?”


I was busy looking for things on my list had hadn't noticed her.


We found her in the refrigerated food aisle. I could tell that my daughter wanted to see her healed, so I walked up and asked what she did to injure her foot. She explained that she had a torn (detached) left Achilles tendon. I asked how it happened. She said it was a rare side-effect of taking the antibiotic Levaquin.

I’d never heard of an antibiototic causing something like a torn tendon.

I asked if she’d had surgery to repair it yet.

"Not yet. I’m scheduled for surgery in two weeks."

I would have already introduced myself, but Lori was so friendly and willing to discuss her life with a couple of strangers, I decided to wait and let her tell us as much as she would without telling her who we were and what we had planned.

If you know me, you know I like to build bridges of trust before asking if I can pray with someone. This bridge was going up quickly. But it was time for introductions, so I told her I was a medic and introduced my daughter.

My daughter and I placed our hands on her immobilized ankle. I asked the Holy Spirit to bring His presence and touch her. I don’t know if she felt His presence, but I did. We commanded pain, inflammation and spirits of infirmity to leave and asked if she felt anything.

“It feels hot down there.”

“Awesome. That’s the power of God healing you.”

We prayed a second time. I commanded the tendon to re-attach to the heel bone and asked what she felt.

“I feel a pulling sensation near my heel.”

I explained that the “pulling sensation” was probably her tendon re-attaching to her heel bone and said she may want to remove the immobilizer and try to walk without it when she got home.

We spent a few minutes talking. She thanked us repeatedly for stopping to pray with her. I gave told her info on how to find this site and asked her to drop us an e-mail and let us know how she was doing.

My Daughter gave me a high five as we walked away.....

Posted by Prayingmedic at 5:00 AM