This story was taken from John Mellor's Facebook page

In 2004 I was invited to Selkirk High School in the Scottish Border regions. I was the Christian representative for their annual World Religions Day. The school was anti-Christian and wanted to give the students a taste of all world religions and cults. There were JW's Mormons, Buddists, Hindus, Rastifarians.... You name it and they were there. We all faced the hundreds of students and had 5 to 10 minutes to present our different faiths.

When my turn came I stood up and declared that "Jesus is alive!" that He was present. I began with Words of Knowledge and declared...."There's a lady teacher here with shooting pains in her lower abdomen.....if you come here now I'll pray for you and you will be healed".

A teacher came forward and she was instantly healed. She cried out "It's real! it's real! the pain's gone!!!

I called out about 4 other students and they were all healed. One had a sprained ankle and he ran up and down the assembly hall! I was going over my time but the teachers and students cheered me on. I told them they needed Christ in their lives and then asked for permission to pray for the whole assembly to receive Jesus.

There was an open heaven and some of the other cult and religious leaders seemed quite agitated but I pressed on. Most bowed their heads and prayed the prayer to receive Christ. Afterwards at least a hundred teachers and students raised their hands in response to this. What an awesome God!!!!

They begged me not to leave and a teacher volunteered his very large home to hold a healing outreach meeting that same night. Many were again saved and healed. They begged me to come back and I did 2 weeks later held a meeting at Hawick down the road. The newspapers came and many again were healed and saved!

The biggest Scottish Sunday newspaper did a major story of a local blind man who received his sight. I don't have room to even tell a fraction of what God did.

The world is hungry to have the resurrected Christ revealed to them!!!!!

Yes, I'd love the opportunity to face Richard Dawkins!!! 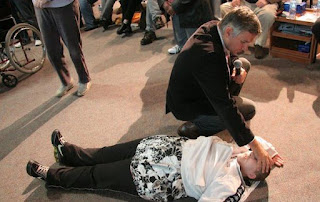 Posted by Prayingmedic at 5:00 AM