This message is likely to meet with disagreement from many of my friends. I would ask that you read the message all the way through and consider it thoughtfully and prayerfully before coming to a conclusion on the matter. I would be glad to discuss your thoughts in the comments section.

The body of Christ has held two opposing views on the forces at work when people die at a young age. Some believe that God has a purpose for "taking" people in their youth, and these reasons often remain a mystery. Most of my friends who have discovered the resurrection power of God would disagree. They believe that we're all entitled to a long, prosperous life. They hold the view that it is only at the hands of the enemy that anyone dies at a young age.

Twelve months ago, I would have agreed with my friends.  When the sacred cow was finally barbecued that said God has reasons for people to die in their youth, we all rejoiced.  In the circles I travel in, the new dominant view is that it is never God's will for anyone to die at a young age.

I've spent a lot of time reviewing near-death testimonies and reading accounts from people who have gone into the heavens. And my perspective on the issue has been changing. The subject we're discussing is emotionally charged and full of conflicting views. Patience is required to sort these things out, so bear with me as I shed a bit of light on the different issues involved.

The argument for a long physical life is made by those who see promises of longevity in scripture. I've searched the bible and haven't found an explicit guarantee of longevity anywhere in scripture. I believe it is God's desire for us to have a long life, which is to say that He always wants us to live in such a way that our years on the earth would be fruitful and many. But I believe that some of our own choices frustrate those plans.

If you believe in determinism, this idea will probably be objectionable to you, for determinism teaches that our own actions cannot thwart the plans of God if He has sovereignly ordained us to live a certain number of years. I personally reject determinism. I believe that our own choices must be accounted for in the grand scheme of things and we can either frustrate or cooperate with His plans by the choices we make.

I believe it is God's desire that everyone would have a long, abundant and blessed life. God is good and He has nothing but our best interest in mind in everything He does. It is actually this principle (our best interest) that I believe is at work when people die at a young age. Allow me to explain what I mean by this.

The human perspective on life tends to focus on things that happen in the dimension of time and space. The temporal things of this world are the things we think about most often and value the most highly. One of the things is our own physical life and our experiences in this world.

When someone dies at a young age, we tend to view it as a tragedy. We consider all the things the departed person might have done if they had lived longer. We're saddened by the fact that they won't accomplish the wonderful things the rest of us will. We mourn the love they'll never know, the victories they'll miss out on and all the things of this physical life that we feel everyone deserves to experience. We value the temporal experiences of this earth rather highly.

It is our temporal perspective that clouds our understanding of life and death and obscures our ability to see how they are viewed from heaven.

I've been reading the book The Spiritual World by Peter Tan. I've also been watching video interviews with Katt Kerr. Both have received extraordinary revelations about the spirit world. Their testimonies have caused me to re-evaluate many of my beliefs about life and death.

I began to question the idea of a guarantee of long life shortly after I began praying for the sick. I had prayed at the bedside of a number of terminal cancer patients, and in visions, I often saw clear indications that the person's time on earth was up. Jesus was taking them home and there was nothing I could do to change it. While my friends in the healing community insisted that we had an obligation to heal everyone, I began to see things from heaven's perspective.

I've watched many interviews with people who have had near - death experiences. In some cases, the Lord would show them the things they would endure if they returned to earth then asked if they wanted to remain in heaven or return to their physical body. If a person chose to remain in heaven, their testimony, for obvious reasons, would never be recorded. But many chose to return, in spite of the difficulties they would face. And that begs the question - what purpose does God have for allowing people to decide their own fate concerning their physical life and death?

Katt Kerr has been taken into heaven hundreds of times to witness different things and reveal them to us, back here on earth. She's attended the homecoming of many departed saints and made an interesting observation about them. When we step into eternity for good - all of heaven throws a party for us. The "death" of our physical body is celebrated with extreme joy and celebration by everyone in heaven. There is no mourning, no weeping or sadness like we have here on earth. In heaven, the death of our physical body means it's party time.

She said that we all get to watch our own memorial service on earth. Nearly everyone who watches their own sad, somber funeral makes the same comment. They wish their friends and relatives on earth were as joyous as the saints and angels were in heaven. Our physical death, from the perspective of heaven, is a reason to rejoice - not to mourn and cry, regardless of the age of the individual.

Peter Tan reports that there are things going on the realm of the spirit that most of us haven't considered. Tan describes millions of different planes, spheres, and dimensions of existence in the spiritual world, each of which serves a unique purpose in the greater plan of God. As we step out of our physical body into the spirit world, we're taken to one of the realms of eternity. If you are a Christian, you'd call it heaven. Though in fact, there are many realms of heaven, each one containing a different aspect of God's glory for us to to become familiar with.

In eternity, we spend time exploring and being transformed into the perfect image of Christ by all the different levels of God's glory that we're exposed to. And yes, there is time in eternity - though it's quite different from how we understand time in this dimension.

The plan of God for each of us is to be transformed (sanctified) into the perfect image of Christ. (See 1 Thess 4:3) That transformation happens in many ways throughout the entirety of our existence, both on earth and in eternity. God is always interested in our transformation into the image of His son. This is the overarching concern behind everything He allows to come into our lives.

Nothing ever supersedes this imperative.

There are many experiences here on earth,which provide opportunities for spiritual growth and transformation. Some are revelatory; others involve overcoming adversity or persecution, but all develop Christ-like character in our spirit-man.

There are other experiences that can cause us to regress backward in our spiritual development. In them, our spiritual light diminishes with each passing day. Some people may go through so many negative spiritual experiences after returning to earth, they end up worse off (spiritually) than if they had remained in eternity.

All the positive and negative experiences that affect our spiritual development are considered when God decides if an individual will remain in heaven or return to earth. Physical age is not one of the major factors considered.

When a person dies, regardless of  their physical age, God examines all the possible outcomes of their continued life on earth and their transition into eternity. He evaluates their potential for spiritual growth in both settings. His decision to allow them to remain in eternity or return to earth is based on His knowledge of all these factors. In some cases, the results of living in eternity and on earth may be so similar that He will allow the individual to decide their own fate.

If  the individual has a chance to grow spiritually by returning to earth, they're usually sent back. But if they have little chance for spiritual growth on earth - they usually remain in heaven, where they'll continue the process of transformation.

Over the course of my career, I've probably interviewed more than 100 people who have had near death experiences. Nearly all of them remember being told "it wasn't their time". Nearly all were explicitly told they had more to accomplish before their time on earth was over. I believe the "something more" is the development of greater Christ- like character in their life.

It's almost time to wrap this up, so I'll close with this final thought:

When a loved one experiences physical death - the biblical response is to pray for resurrection. (Matt 10:8) We pray for resurrection because we don't know if they're going to remain in eternity or return to earth. If they need to return, our prayers enforce God's will for them to return. In situations involving resurrection, it's wise to ask God for a specific revelation of His will so that we might pray in accordance with it.


I'll post a instructional message in the next few weeks on how and when to raise the dead. 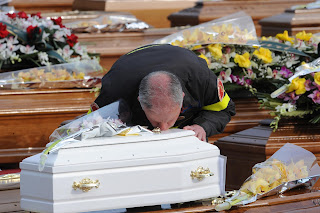