This is an excerpt from my newest book Emotional Healing in 3 Easy Steps.

It’s been said that time heals all wounds, but the truth is that time doesn’t heal emotional wounds. Rather than being healed over time, emotional trauma can plague us our entire life. Emotional trauma creates a wound in our soul much like a flying piece of metal can cause a wound to our skin. Although our skin has a way to heal the wounds it receives, our soul doesn’t have the ability to heal itself.

Emotional trauma has the potential to affect the entire soul, but God designed a way to limit the damage of emotional trauma by allowing the soul to create what are known as fragments. A fragment is a part of the soul that contains the memories and emotions of a traumatic event. It’s like a part of our personality that’s been frozen in time. Fragments prevent the wounded parts of the soul from becoming the dominant influence over the core of the soul. In effect, the fragmenting of the soul compartmentalizes the wounds and minimizes the damage that can be done to the rest of the soul.

A soul fragment will assume control when they perceive there is a threat to the individual. The actions of a soul fragment are usually an overreaction to the situation because they have less understanding of what is normal and acceptable behavior when compared to the core of the personality. When the threat goes away the core of the soul regains control, the fragment once again becomes dormant.

I know a woman who has a terrible fear of going into basements. When I asked why she had this fear, she said it was because she had been molested by her uncles in a basement when she was a child. At the time she was molested, a part of her soul was wounded which created a fragment dominated by fear. Today, whenever she thinks about going into a basement, the fragment is triggered and she feels fear.

A similar but different part of the soul that is created by trauma is known as an alter. Like a fragment, an alter retains memories and emotions of specific events, but unlike fragments, alters can have unique personalities of their own that are distinctly different from the core of the personality. A person with many alters is usually diagnosed with Dissociative Identity Disorder, or what was once called Multiple Personality Disorder. A severely traumatized person can have hundreds, or even thousands of alters.

When an alter is triggered by an event, the individual’s will and emotions come under the control of the alter. The person behaves in correspondence to the personality of the alter, while the core of the personality is rendered ineffective. The core personality sometimes feels like an observer to what is happening to them, instead of the participant. Some describe it as like having someone drive their car while they watch from the rear seat. Sometimes the core personality is completely unaware of what’s happening to them—a condition known as dissociation. When the event passes and the core assumes control again, it’s not unusual for them to have no idea what they said or did during the episode.

The goal of emotional healing is to heal the fragments and alters and to reintegrate them into the soul, preventing future episodes of painful emotions and dissociation.

For more information, check out my book Emotional Healing in 3 Easy Steps. 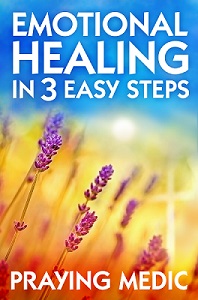 Posted by Prayingmedic at 7:30 AM