An Analysis of Concerns about Qanon

During the last few months, I've been bombarded with messages from friends. The messages contain links to articles and videos where religious leaders have insisted that Q's operation is intended to lead people away from God. A number of separate but related concerns have been expressed about Q. In this article, I'll address them one by one.
An Illustration
I once met an atheist who said God doesn't exist. He claimed that this is what the Bible teaches. Intrigued by his statement, I asked him to explain. "The Bible says there is no God. Look it up in Deuteronomy chapter 32 and Isaiah 45." I examined the text of the verses he cited.

“I am the Lord, and there is no other; Besides Me there is no God. I will gird you, though you have not known Me; Is 45:5

My atheist friend was right. The Bible does say, "there is no God." But when we consider the phrase in context, we can see that in each case, it is part of a larger statement that emphasizes the realities of God's existence. When a statement is removed from its original context, it can be twisted to mean the opposite of what was intended.
The Context of Q
Qanon is an operation that provides information about historical and current events. The clues and information posted by Q create a narrative of history that differs from the one promoted by the mainstream media. This is the overarching context that must be applied to all of Q's posts. If this context is not applied—if Q's statements are taken out of context—they can be twisted to mean the opposite of their intended meaning. Sadly, that is what many people have done. One pastor took exception to Q's statement, "Sheep no more." In a sermon, he reveled in the fact that Jesus called himself the Good Shepherd and we, his sheep. He was outraged at the suggestion that we are not the Lord's sheep.

The comparison of humans to sheep is a metaphor that can be used to illustrate different ideas. It may describe, in an allegorical way, the relationship between Jesus and his followers. We are called His sheep because sheep follow their shepherd. In this case, the allegory speaks of devotion. The term can also be used in a derogatory way. Sheep are incredibly dumb animals. For that reason, people who are gullible, naive, and clueless are often called sheep. In the context of Q's operation, those who blindly accept the narrative of the mainstream media are referred to as sheep. In some cases, Q says the elites who use occultic symbolism to openly display their evil view us a sheep. 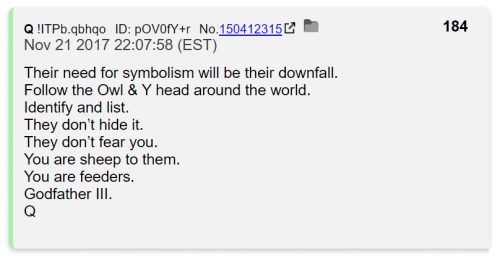 Q has never suggested we are not God's sheep. But when his statements are taken out of context, they can be twisted, and the argument is then made that he opposes the teaching of the Bible. Some are concerned about Q's admonition to "trust yourself." Apparently, pastors are offended by this message, claiming it goes against the biblical instruction to trust God.

Once again, context is essential. We know that Q's operation is about uncovering the facts of historical and current events that are ignored by the mainstream media. In the post above, Q said news outlets report false information to receive clicks or to push a false narrative. Rather than blindly accepting their false narrative, Q encourages us to do our own research and trust the conclusions we come to. His statement "trust yourself" is limited to trusting your understanding of current news events. It has nothing to do with whether you trust God. Personally, I've found that it is God who helps me connect the details I uncover in my research. I depend on Him to give me understanding. In that regard, trusting yourself and trusting God are not antithetical.
One pastor objected to the fact that Q referred to the U.S. military as the "savior of mankind." He then launched into a diatribe about how only God is our savior, and the idea that anyone else could be a savior is positively demonic.

If this statement is removed from its context, it can be twisted to mean something that was not intended. Q is not a theologian. His operation is not about religion. He does not (normally) teach on the subject of soteriology—on how the soul of man can be redeemed. Therefore, if he uses the term "savior" or "salvation," the intended reference would be to something other than theology.
In what other sense might the U.S. military be viewed as the savior of mankind?
Whether we choose to believe it or not, there are wealthy, powerful people who abduct children so they can be tortured and raped. Ghislaine Maxwell and Jeffrey Epstein enabled this kind of activity. Child sex trafficking isn't an isolated phenomenon; it happens in every country. Because civilian courts had turned a blind eye to the issue, the U.S. military stepped in and began shutting down human trafficking lanes around the world. 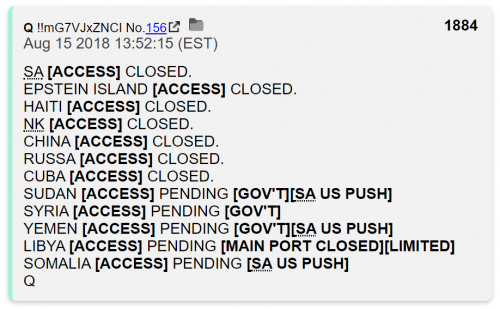 When Q says the U.S. military is the "savior of mankind," he means the military is the only organization in the world currently working to end the trafficking of those who cannot protect themselves. But even in the post where he supposedly committed blasphemy, Q closed with a statement his critics have ignored— "God save us all."

I could provide a dozen more examples where someone took a post out of context and accused Q of ungodly teaching, but I think you get the point. If you find something in a post that seems a bit off, before jumping to conclusions, consider the message as it applies to the context of Q's operation.
Read the Posts
A religious leader may have an opinion about Q, but if they have not read the posts, or followed the decodes of someone who has, their opinion is uninformed. An uninformed opinion about any field of study is worthless, and Qanon is a field of study unto itself. In the same way that you can't understand microbiology without taking classes or reading books on the subject, no life experience and no amount of education can give you an understanding of Q's operation. The only way to understand Q is to read the posts and do the research. I respect the opinions of people who have expertise in certain areas. But there is no reason to respect the uninformed opinion of someone who hasn't read the posts.
Why Do People Worship Q?
It has been observed that some people seem to worship Q. That fact isn't surprising. Mankind was created to venerate (worship) God. It's encoded in our DNA; it's the purpose for which we were created. But not everyone sees the value in God. Some prefer to exalt Hollywood celebrities. Some kneel before the altar of Black Lives Matter. Others find incredible value in the 17th letter of the alphabet. The fact that people choose to worship a person, an activity, or an idea does not make the thing worshipped evil. When we choose to worship an idol, it says nothing about the idol but it speaks volumes about us. Q has, on many occasions, cautioned people not to worship (glorify) him.

Is Q a Cult?
While it is evident that Q followers are involved in some type of movement, to know if it is a cult, we need to know if the movement engages in the kind of behavior typically seen in cults.
Most cults center around the teaching of a charismatic central figure who provides personal revelation and guidance to the cult’s members. Cults generally have an established leadership hierarchy. The doctrines of the cult flow from the central figure to the leadership team and are reinforced by them. Cult followers are praised for learning and obeying the leader’s teachings and observing the cult’s rituals. They are punished (or publicly humiliated) when they don’t.
In contrast, there is a central figure in the Q movement, but no one knows who he (or she) is. The movement has no identified leaders. There are no official meetings that Q followers attend or even an organized way of communicating. There are no official (or even widely accepted) doctrines in the Q community. Each person who reads Q’s posts finds their own meaning in them. They emphasize whatever ideas, values, or concepts are important to them. Cult leaders are primarily interested in controlling the thoughts and the behaviors of the cult’s members, while Q insists that people think for themselves. It may appear from a distance as though Q has recruited a cult following, but a closer examination reveals this is not the case.
I’ll close with my response to the claim that Q might mention God, but he never mentions Jesus. Last year, Q felt it was worth pointing out that Jesus Christ is the reason we celebrate Christmas.

Posted by Prayingmedic at 12:38 PM