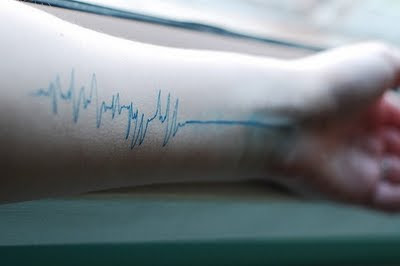 This story was originally published here on the Bridgeway Church blog.

On April 10th and 11th Greg Morgan and John Carvey brought me (Rick Mann) and Jim Rogers to the Navajo Nation to pray for a congregation in Ganado. While there I got to be good friends with a pretty new Christian, Jeff, who was like a sponge. He wanted everything that God had for him and his family. He asked me on Saturday night if anyone in our congregation at BridgeWay Church had ever experienced someone being raised from the dead. I told him about the Tanzania Team with Jim Rogers and that many miracles, including someone being raised from the dead had been witnessed. Well, Jeff said he wanted that anointing for his family and his church. He had me lay hands on him right there and give him all that BridgeWay had in God's anointing. This guy is hungry for the Lord to move.

Sunday's service lasted from 9am to around 4pm. Jim and I prayed for the fire of the Holy Spirit to fall on the congregation. Many of the parishioners from the Ganado church came back in the prayer line multiple times for the Lord's anointing to fall on them.

The following week I called Jeff to see how he was doing and if the Lord was still on the move there. Jeff said he was glad I called him. He had a huge testimony to share with me. He said that after the BridgeWay team left them on Sunday night, the Lord told him to stay in the spirit. Jeff said that the anointing of the Lord fell on their church in Ganado on Sunday and remained on them after we left. Monday morning he got the terrible news that his cousin had hung himself.

An ambulance took his cousin to a hospital in Albuquerque and kept him on life support until his family could come and say goodbye. They declared him brain dead upon arrival at the hospital. The Lord told Jeff to stay in the Spirit while he went to see his cousin. When they got to the hospital in Albuquerque, Jeff and his wife went in through the doctor's entrance and all of the pass card protected doors just opened for them as they went through. When they got into the room, his cousin's head was swollen and dark from the hanging injury.

The doctors told him that they tested for brain activity and he was declared brain dead. After the family said their goodbyes the hospital was planning on unhooking him. He was essentially dead already. The Holy Spirit directed Jeff to pray Romans 8: 9-11. ". . . .He who raised Christ from the dead will also give life to your mortal bodies through his Spirit, who lives in you."

After Jeff read this scripture to his cousin, tears rolled down the face of his cousin in response! After that, Jeff says that the doctors retested his cousin's brain activity on Tuesday, the next day, because they saw movement in his cousin's legs. The test showed some brain activity coming back. On Wednesday, his cousin sat up and said "get me out of here! I want to go home!"