Two years ago I met a Satanist on Haight/Ashbury in San Francisco where the start of the hippy movement began. God taught me a lot in that experience about how people get set free. It basically works with three components, and it was these three components that Jesus used in His ministry.

So this guy asked me for a cigarette and I told him I don't smoke. I began a conversation with him. He told me he was an Iraq war vet, in the marines. He's homeless and apart of the "Occupy Oakland" movement. We talked for about 20 minutes then he told me that he had a torn rotator cuff that needs surgery. I asked him if I could pray for it to make it well. He said, "No, no...I'm a Satanist bro". He proceeded to tell me all of his beliefs about God and the world. I just listened to him. I then said, "I'm not like other Christians you've met. I love people and I see value in you. There's love in you. There's a big heart that has been covered and people don't see it, but I see it."

He then told me that he has two daughters living in Oakland and that last week he celebrated his 12 year old daughter's birthday. He gave her a birthday cake which was "hash brownies" (Marijuana laced brownies). She got so excited and was jumping up and down saying  "You're the best dad in the whole world!", and he said he started crying when she said that. I actually started crying myself just because the situation was so messed up, but in that, his daughter showed him a form of love and it moved him so much. Up to this point, I just wanted to hold this big guy because he was starving for love.

He told me that he nearly beat a man to death for raping his daughter's friend. He served 5 years in prison for it. He was pouring out his life to me. I asked him again if I could pray for his shoulder and at this point, he felt more comfortable with me and he said, "Sure". So I laid my hands on his shoulder under the signal light on the corner and started to command the infirmity to leave. I prophesied as well, then I told him to check out his shoulder. When he moved it, the pain started leaving. I prayed again and it was completely gone. He was swinging his arm and couldn't get it to hurt. He was shocked because he also had been a shaman and he would heal people, but could never be healed himself.

From this point, I just laid into him the good news of Jesus in a way he had never heard. He was no longer objecting to it. I told him "God has a plan for your life." He started crying  because his mom used to tell him that when he was once a pastor! His mom told him recently that all the seeds he sowed into people's lives, (ten or fifteen of them) had gotten off drugs and were walking with God now. He cried telling me all that and said, "Now look at me. I'm homeless and an alcoholic?"

I told Him, "The Lord is still saying 'yes' to you," then I asked if I could pray the Holy Spirit on him. He said "yes".

I told him, "When I touch you, you're gonna feel something that cannot be compared to any other drug you've had." I put my hands on him and prayed for fire and love. His eyes were closed and tears were coming down his face.

After I was done, he opened his eyes and said, "That was intense!" We talked more and I just kept pouring the love of God into him. After I was done, God told me to tell him that tonight Jesus was going to visit him in a dream. He said, "Okay!" He told me that 16 years ago was the last time he felt God. I told him "16 years from that day God came and touched you again because He loves you".

On the corner where rebellion against the establishment was birthed in the 60's, God showed up in love and in power to tell a prodigal son to come home.

I didn't engage with him and argue all of his outlandish ideas about Jesus and the Father. I ignored it, changed the subject, and told him about the love that I saw in his heart. I kept hitting that point until he finally softened. He was changed from a hardened Satanist into a sensitive puppy dog. Here's how it worked:

Love brings down the walls. Power brings validity to truth. Truth sets the person free. When I first met the guy and he found out I was a Christian, he immediately put up a wall to me. My goal was to get the truth into him, but I couldn't because of that wall. So what did I need?

Love brings down the walls. It makes the person realize you're not a threat. Once the wall was down, he let me in and then I could display God's power through the healing. Once the power was shown to him, when I spoke truth, he was more open to believe it because the miracle testified of the truth. Many people have walls up and it's because they've been hurt. Trying to display God's power and speaking truth to them can be difficult. Love should be the thing that begins every encounter.

For some people, you'll have to display love to them for a very long time before you'll have a chance to display God's power or speak truth to them. This is because their walls won't come down easily and until the wall is down and they feel safe with you—there's no way they will receive the truth. At the same time, you can't only work in love and expect that everyone will change. Mother Teresa did a lot of loving throughout her life and yet thousands died in her loving arms, scared, depressed and fearful. When love and truth is shown without the power, you can have a person who believes in the existence of a supernatural God, but they have very shallow faith that is shaky and can waver.

The moral of the story is: you need all three. 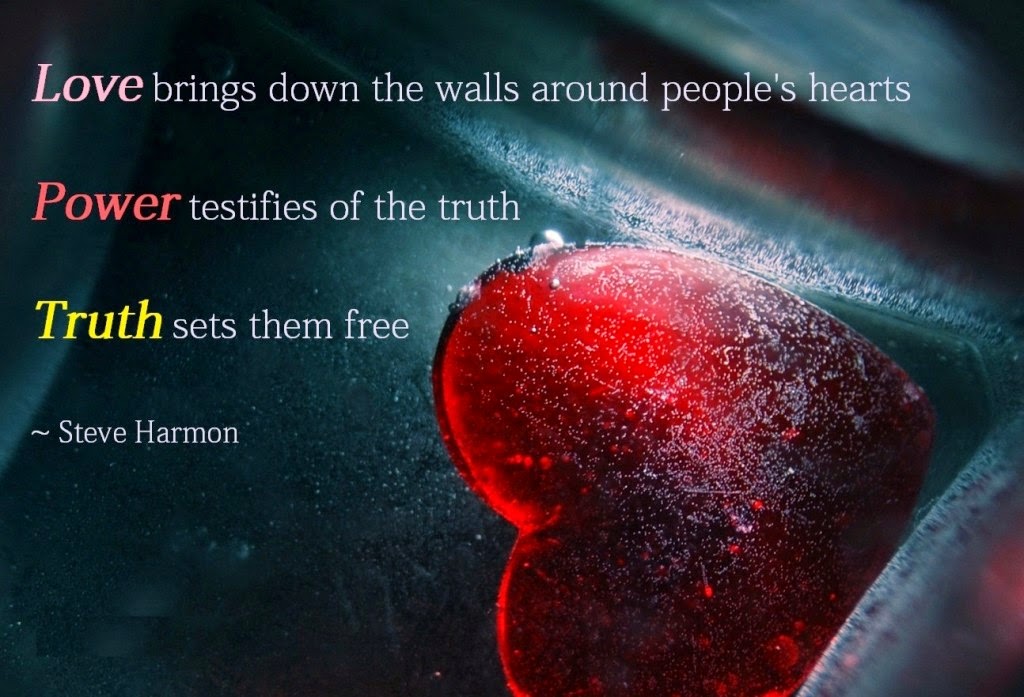 Posted by Prayingmedic at 10:31 AM