Russian Doctor Raised From the Dead After 3 Days

This story appeared on the Discovery Channel a few years ago. It's the story of a Russian doctor who died from injuries after being hit by a car. (See video below) Three days later on the autopsy table, he came back to life. His experience included a life review, watching his parents being taken as prisoners and their eventual death and watching the morgue attendants remove his body from the freezer and the preparation prior to his own autopsy, just before he came back to life. 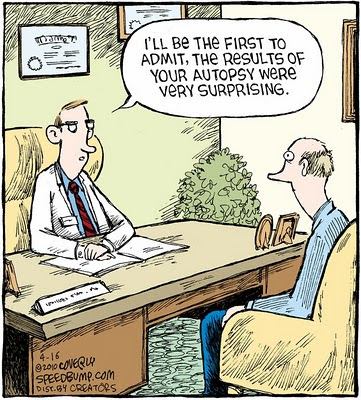 His experience forever changed this brilliant scientist. George may have realized that the weight of eternity and the call of God have greater priority than the things of academia. The apostle Paul considered all his learning rubbish compared to the things of heaven.
The video contains a discussion on the nature of near death experiences. Some believe that consciousness is limited only to physical body - and specifically to the brain. They must attribute the near death experience to some form of hallucination or mental imagery taking place in a body that only appears to be dead. This explanation fails to account for many features of NDE's, like knowing details of conversations in other places and actions taken by people while the one experiencing the NDE was in fact, not present in the room or even alive at the time.
It's my opinion that these explanations really explain nothing. The only satisfactory explanation for the near death experience is that we have a consciousness, separate from the physical body that transcends the natural world. We have a spirit that is just as real as our physical body, though it isn't always apparent to us. When our physical body dies, our spirit continues to live and record experiences. Scientists may not like this proposition. Research on the spirit world are problematic. But as testimonies pile up, we must consider the evidence and weigh it.

Posted by Prayingmedic at 6:34 AM