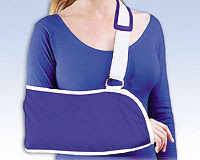 We brought a frequent flier to the emergency room. Not long ago, my partner transported him 3 times in one day. This time he called 911 for a headache.

As my partner steered him to the waiting room, I noticed a receptionist at the ER desk with her arm in a sling. My partner gave report on our patient. I pulled up a chair and began asking about the injured arm.

She fell in the shower, but didn't have an x-ray yet because she was afraid to hear something would be broken and that would require surgery. She was afraid.

I asked if she wanted to be healed.

She said, "I'm at work, I can't do something like that that now."

I told her I'd developed a quiet method of healing that wouldn't draw attention. No one would know about it.

I placed my hand on her elbow, and very quietly, with my head down, commanded the pain and inflammation to leave and the spirit of pain to go and never return. I asked if she felt anything.

I repeated the process one more time and asked what she felt. She described a sensation of warmth inside her arm, which was strange since she had an ice pack inside the sling.

We talked for a few more minutes. I explained that the pain might return and told her to stand on her healing and if any pain returned to command it to leave.

An hour later we were at another hospital, transferring a man to a nursing home. His step -daughter was attending to him. She was in a wheelchair. I had to ask....

Healing in the emergency room is best done quietly. People were coming and going. No one was paying attention to us. I prefer to keep it that way. Don't draw attention to yourself. I asked why she was in the wheelchair.

"Because my ex-husband has an anger management problem and something he did gave me a spinal cord injury. "

I didn't ask for details. I could see she didn't want to talk about it. I knelt down and talked with her at eye level. I told her about the healing we just witnessed at the other hospital. I asked if she wanted to be healed.

She hesitated. "I have people praying for me, but I have a lot of problems with my right foot. I still can't bend it." She lifted up her right leg and displayed her limp foot and how she couldn't move it.

I told her I see miracles almost every day. She agreed to let my pray. I placed my hand on one of her legs and commanded her spinal cord to be healed and her legs and feet to be strengthened. I asked if she felt anything.

Her: "Tingling...mostly in my right leg."

I prayed over her one more time and told her she was on her way to being healed. I gave her some discharge instructions on how to maintain it over the long haul. She thanked me and watched as we loaded her father in law on the gurney.

As we left, I took her hands in mine one more time and told her, "You are healed. God is faithful."