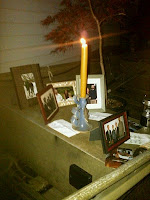 I was working when my sister called. She left a message. "Call mom as soon as you can. We have bad news about Rob." The bad news; my younger brother Rob had just been diagnosed with cancer. But it was worse - the cancer had already spread past the point of being treatable. The doctors felt chemotherapy at this stage would be no use. Their prognosis was that he would die quickly.
I broke the news to my wife. She cried herself to sleep that night. I've already lost my father and one brother to cancer. She's afraid it will eventually come after me. While working the following day we made plans to fly to North Carolina. Our main objective - to heal my brother.
A couple of friends dropped by before we left. Todd reminded me not to pick a fight with the enemy. David reminded me that I was on business for the kingdom. They prayed over me and left for their own assignment. On the flight to Charlotte, Todd showed up in a vision. He taught me how to wage war. He spoke to the disease like he would anyone else. He wasn't angry. He didn't make accusations. Emotionally, he was unmoved.
In the vision Todd taught me patience in dealing with disease. I sensed no fear in him. Fear is one of the enemy's greatest weapons. As I watched him talk with the disease, I learned that confidence in who I represent is a key to victory.

After picking up the rental and checking in, we met my family at their house. They had a plan. I have a large family. One of us would stay in Rob's hospital room each night to help with his care. Since I was only staying 2 days, tomorrow would be my turn. We got caught up on what they knew about his condition, then turned in for the night.


I spent most of the next 24 hours at the hospital, the majority of it with Rob. I read his chart. His symptoms began 5 months earlier but he didn't seek medical treatment until it was too late. He had small - cell carcinoma of the prostate with metastasis to the liver and possibly the pancreas and bladder. He also had DIC (disseminated intravascular coagulopathy) which causes both excessive bleeding and abnormal clotting. Rob was in a lot of pain, which they managed well.

I prayed as led by the Spirit for most of the morning and afternoon. I usually close my eyes and God shows me the problems then I pray accordingly. I saw tumors, blood clots, cellular structures, demonic beings, damaged organs and many other things that needed repair. Finally I saw a bright, golden ball of light traveling through his body from his head to his feet. I believe it was the glory of God.

In the evening I prayed against depression, pain and despair. It seemed as if Rob's emotions were under attack. I prayed as led by the Spirit. He woke up once every hour. I asked if he was in pain. He always said 'yes', so the nurse gave him morphine.

When Rob was admitted, one of his doctors asked if he was a Christian. Rob replied that he was an agnostic. During the times he woke up he was too sedated for a real conversation. But he did understand simple commands. I told him I had an important thing for him to do. I said, "Jesus is looking for you. I need you to find him." He said, "OK, I'll look for him."

At 2 in the morning I felt like the warfare was done. Each time I went back to Rob's bedside to pray, I saw nothing to pray into. I began worshiping God and rested in His presence. At 4 am Rob awoke. I asked if he was in pain. He said, 'no'. I asked again and got the same answer. To make sure he understood the question, I asked if he wanted morphine, he said, 'no'. He refused morphine the rest of the day. Somehow his pain was gone

Rob's wife came to see him around 9am. When I told her Rob didn't want morphine, she didn't believe me. Everyone who asked that morning got the same answer. He wasn't in pain. Brothers and sisters came and went. I got lost in the blur of activity. I sensed my mission was done, so I went to the house to meet my wife and the rest of my family.

I gave them a report on what happened overnight (without the details of my prayer time). I was full of faith and confident Rob would be healed. We left for the airport and arrived early. I was exhausted, so I dozed in the terminal, but I slept better on the airplane. During the flight I had another vision.

I saw Rob lying quietly with his eyes closed. As I watched, he slipped into a dark body of water. Then he was gone. My heart sank. I knew what it meant.

The next morning, while at work, I received the phone call I feared. It was my mother. "Rob died a few minutes ago. Ellie is a wreck. Keep her in your prayers."

The Rest of The Story

While discussing Rob's condition with my older brother Richard, I learned something. Rob had already accepted his death long before I got there. "Rob already said his goodbye's. He's OK with dying now. He's ready for whatever comes next."

When the doctors told him there was no treatment and he would die shortly, Rob accepted death without a battle. Most of us have heard stories about soldiers who sustained injuries that were survivable, yet they died because they believed their wounds to be fatal. We also know of soldiers who have been ripped in half and shouldn't have survived, yet they did. Our will to survive is critical in the realm of both medicine and divine healing. It's almost impossible to keep a person alive, once they've decided it's their time to die.

The same day Rob died, (November 9th, 2010) we posted the testimony of a man who was miraculously healed of liver and bladder cancer. That story was set up to post two weeks in advance. When his doctor told him he had an aggressive form of cancer this was his response: "I have a relationship with the greatest healer in the world. He name is Jesus Christ and he will heal me." This man pursued his healing and was miraculously healed a short time later.

While talking with my brother Richard, I also talked with his wife Karen. I heard she'd been hospitalized with blood clots in her leg and asked her to explain it. She's had vascular disease in her lower leg for a long time. "My foot has been ice cold for as long as I can remember. There's almost no circulation. The doctor's aren't sure what to do about it."

I asked if she wanted to be healed. Her eyes lit up. "Yes!" I commanded the blood vessels to be healed and the spirit of sickness to leave. I spent about 10 minutes in all praying over her leg and foot. She didn't feel any immediate evidence of healing, but the next morning her foot was warm. Later in the day she told me her foot was cold again. I explained the nature of the spiritual battle and how the enemy tries to convince us we aren't healed. She smiled with understanding. I put my hands on her leg and commanded it to leave again and told her to do the same thing if it came back in the future. Two weeks after I prayed over her foot, she posted a message on my Facebook page telling me her foot still "feels wonderful".

While I was praying for my brother, my wife had another assignment. She had a friend who was in the other hospital in the same town we were in. Her friend had been hospitalized with problems related to anorexia, something she's battled for 30 years. My wife just happened to arrive at the other hospital at exactly the right time for visitation. She needed a password to be admitted to the mental health ward but didn't have it. One of the employees had mercy on her and allowed her in.

As they talked, my wife asked if she could pray with her friend for healing. As soon as she said this, her right hand began to vibrate with power. She placed her hand on the friend's abdomen. They both felt power going into her body. We've been in touch with her friend several times since then. She seems to have made a lot of progress and has a more confident attitude. She now believes she can win the battle.

I learned a few things from this experience. One is that healing is indeed warfare, whether we see it that way or not. It's warfare on a level most of us can't fathom yet.

On the same day that my brother died of cancer, a different man's healing testimony for the same disease was published. I can't help but think that our response to disease has a major impact on our survival. The Israelites heard two reports about their odds of beating the Caananites. The majority report saw what was possible with man. The minority report saw what was possible with God. Those who believed the bad report paid for it with their lives.

God's plans are not always clearly mapped out. But his promises are availablel to those who will receive them. Someone you expect to be healed may die. Someone you don't expect may be healed. Ask around. You never know who is waiting for the Master's touch.

I don't have a problem with doctors giving a patient a diagnosis. That's their job. But it's not their job to predict the future and that's what a prognosis really is. We turn ourselves into prophets; forecasting a patient's demise in a certain time frame. Patients see us as experts. They take our prognosis seriously. When a patient is told there is no hope, that often excludes the miraculous as a possibility. But the miraculous is always possibile. Perhaps the prognosis of "no hope'" ought to be changed to something like, "There is no medical treatment that will cure you, but a miraculous healing is always possible."

We owe it to our patients, friends and family to speak hope, however small it is, into their lives.