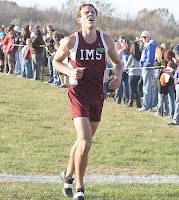 This story was submitted by my friend Jason McCoy

About a week ago, we got a call from friends. Their son was injured and couldn’t run. He is a state champion cross country runner and about to finish his high school competing...now sidelined. Severe pain. Some kind of injury in his gluteus muscles. We prayed and he felt some relief. We declared he would run in the race that week (the one his doctor said he couldn’t run in!) We told him that even if he feels any pain- tell it NO, command it to GO and hammer it with scriptures like the above. He ran and we got an email describing more pain. We reminded him how to fight. The next email we got said he not only won his race, he won by 30 seconds!

In the article written about the race, it says “I can only say that God was in that,” said Spencer, who crossed the finish line in 16:08. “I honestly have no other explanation. I’ve been running no more than two miles a day for the past two weeks, and no hard training whatsoever. I came here not knowing if I was going to be able to run, let alone winning by a considerable margin. That came out of nowhere. I was just amazed. I felt a little bit of pain, but the more I ran, the harder I could push it,” Spencer said. “It kept hurting more and more, but I could just keep going. I don’t know what it was. It was a strength I’ve never felt before.”

This week, the newspaper wrote about him again. He competes for the state title this year, and his coach said “Somehow, he’s maintained the conditioning he had before [the injury].”

Well, we know how he did it!

2 Cor 2:14 Now thanks be to God, which always causes us to triumph in Christ, and makes manifest the aroma of his knowledge by us in every place.

Here are the links to those articles:
Article 1