This testimony was submitted by my friend Mandy Madryga who lives in South Korea. She ministers healing on the streets of a city where where she doesn't know the language. 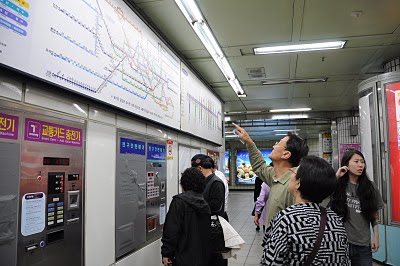 I was on my way to write an exam at a church for a distance course I was taking. I got on the subway at the beginning of the subway line, listening to a Todd White or Dan Mohler sermon. A few seats away was a older-middle-aged man with thick, bushy eyebrows. I just wanted to sleep, but for some reason I couldn't get his face out of my mind, and I kept seeing him as I tried to close my eyes and sleep.

I figured that I better approach him and offer to pray just to shut up the distraction I had that was keeping me from relaxing and sleeping - plus, after a few stops, I realized that I'd probably loose my seat on the subway if I didn't act soon, because some busy subway stations were approaching.

So, I got up and walked over to the man who was sitting diagonally across from me and handed him my, "Can I pray for your healing?" card written in Korean. He gestured to me that I could pray for him, and I was a bit shocked because I didn't SEE anything wrong with him. I prayed a simple prayer for generic healing, and blessing, and for God to fill him with His love, and started walking back to my seat.

As I walked back to my seat, the man kept holding up both hands and giving me thumbs-up, and smiling. (He didn't speak any English). The subway filled with people - a Korean subway car probably has about 50 people in it on average. He was still on the subway 30 minutes later when I reached my stop...I was surprised he was still there. As I stood up to get ready to get off at my subway stop, the man stood up...10-15 feet away from me (remember that he across from me on the subway)...and kept bowing at me many, many times until I got off the subway.

I have no clue what went on there...but something BIG must have happened. I've never seen someone bow in respect like that to anyone else on the streets . . . plus, he was OLDER than me....so technically, if anyone was supposed to bow, it should've been me -- Koreans are BIG on respecting age (I usually do a little bow gesture as I say thank you to people I pray for, no matter who they are...but especially if they are older, or people who wouldn't normally get respect in Korea).

Yeah, so God did something, and I probably won't find out what until I get to heaven. Don't let language stop you from praying for someone....language barriers just make you learn to smile and express love and respect through body language more!
Posted by Prayingmedic at 7:00 AM