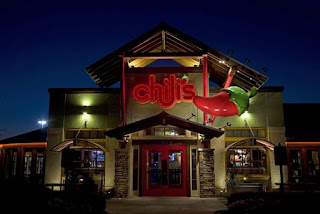 My wife and I have a tradition that we enjoy. After four years of marriage, we still go on a dates. Last night we drove to Saguaro Lake. On the drive out to the lake we talked. Afterward, we went to Chili's restaurant for an appetizer.

The food was good, the conversation was light and the company was beautiful.

As we made our way to the exit, I noticed that the hostess was limping slightly. So guess what I did?

Good guess. I asked if she wanted to be healed. Guess what her reply was.

Her name was Jill. I introduced myself and my wife and explained that we see people healed at stores and restaurants and asked if we could pray for her. She was delighted that we offered.

One waitress was fascinated with this and looked on eagerly. Her name was Stephanie. I asked Jill and Stephanie if they'd ever seen a miracle. They both said no. I told them they were about to.

If you've been following this blog, you know that I've been more bold in declaring what God will do, before He does it. My boldness comes from knowing Him. I know He wants people healed and seeing Him do it consistently allows me to approach them and declare what He will do. I can't recall a time that someone wasn't healed when I declared that they would be healed in advance. Perhaps that's worth looking into.

Jill said she had just pulled her hamstring muscle about 15 minutes earlier and that's why she was limping. I asked how bad the pain was. She rated it 7 out of 10. I placed my hand on her leg and asked the Holy Spirit to bring His presence and power.

I've never felt His presence show up so quickly. As soon as the words left my mouth we felt the atmosphere change. I began to sway back and forth. "Wow....can you feel that?"

I thought about this for a moment....."Why did He show up so quickly?" It's like He was just waiting, anxious and excited. Waiting eagerly for me to say the words so that He could bring His presence into the atmosphere.

I truly believe God is more exited about healing than we are.

Standing in the entrance to the restaurant, becoming slightly intoxicated in His glory, I commanded her hamstring to be healed in Jesus name. It took about 5 seconds for her mouth to drop open in complete shock.

"Oh my God....who are you? How did you do that?" She was healed immediately and began walking around checking it out. She couldn't believe it happened that fast. She demanded to know how I did it.

Some Christians wonder what the best way is to bring up Jesus to strangers so that they can 'witness' to them. If you heal the sick, it allows you to talk about Jesus the rest of the night. And that's exactly what we did.

Jill and Stephanie fired questions at us and we discussed how it all works. They'd seen faith healers on TV, but had never heard of anyone doing it in public. We told them it's become a lifestyle for us and we explained that anyone can do these things.

We asked Stephanie if she had anything she needed healed. She told us she had a bone spur on her heel that said maybe we could pray for her some other time.

I told her to sit down and we'd get her healed right now.

She took a seat. I asked her to put her foot on my knee, asked how bad the pain was and commanded it to be healed, then asked if she felt anything.

"It feels weird, like there's a kind of buzzing going on."

Jill chimed in, "That's what I felt, too!" It's like this buzzing thing starts and then all the pain is gone!"

"That's the power of God healing you." I asked Stephanie if there was any pain and there was so I commended it to leave and had her stand and check it out.

She got up and stomped her foot repeatedly in amazement. She tried to make the pain come back, but she couldn't. It was gone.

We talked some more about Jesus and shared a few testimonies. I told them how to keep their healing and gave them information about this website.

As we left, we invited them to contact us if they had friends or relatives who needed healing. Three men walked in the front door and overheard what I said. I told them to ask Jill and Stephanie what just happened to them.

I would imagine they shared their testimonies about Jesus the rest of the night. That's the kingdom of God. It appears in their lives and they tell everyone they know about the great things He has done.

It's not about us. It's about Him.