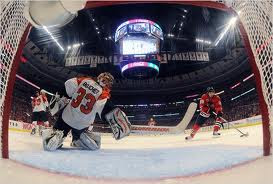 At 19 years old, Jonathon was living out his dream of being a professional goalie. That dream came to a screeching halt when a slap shot broke his collar bone. Thinking it was just bruised, he stayed in the game.

When the bone finally broke completely in two, it severed both muscle and tendon and left his shoulder a surgical mess.

In the operating room the surgeons retrieved and re-attach the severed sinew but Jonathon's career as a goalie was over.

He pursued a career as an electrician and did well for himself until the housing market crashed.

As a child, his mother told him, "Be whatever you want, just don't grow up to be a Kirby salesman."

One day she received a phone call. Jonathon gently broke the news to her, "Mom, I'm selling Kirbys."

Ten years after the career ending slap - shot, Jonathon came to our door. He's training new salesmen for Kirby. We did the introductions and Jonathon left. Our young salesman, Ryan was excited and full of energy. 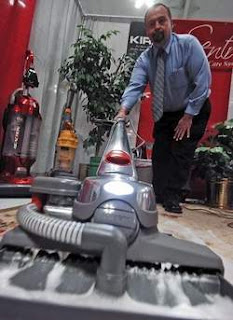 He did his thing and asked if I had a hobby.

There was a long pause.

I decided to tell him about healing.

We shared some of our more interesting testimonies and our history with God. He seemed interested and asked a lot of questions. At one point he became so engrossed in the stories, he forgot where he was in his sales presentation and had to check with the outline to get back on track.

An hour later the doorbell rang. It was Jonathon. He came in and asked how Ryan was doing. We told him Ryan was doing great, but we couldn't buy the Kirby. He was very understanding.

We talked with Jonathon for a while. He shared his life story with us, including the broken collar bone story. Putting his arm up, he showed us the limited range of motion he still had ten years later.

Ryan had been listening to healing stories for the last hour and now he wanted to see one for himself. Fortunately, Jonathon is a believer. We explained what we'd been talking about and he agreed to let us pray. I asked my daughter, "You want to do it or should I?"

I didn't give her a choice. I walked to the other side of the living room to watch. She went to his left side and my wife went to his right and they began. After 30 seconds we asked if he felt anything.

"It feels warm inside and I don't know....there's like this feeling of weightlessness."

"Raise your arm up."

As he did, we heard popping noises. He had almost full range of motion. He was stunned and almost speechless. We talked about How much God loves to heal people and he shared his wonder at how easily the healing came.

Ryan was just as shocked, because he knew Jonathon couldn't move his arm like that just a few minutes ago.

Jonathon said he had degenerative joint disease in his neck and back so we prayed over that and the heat increased. He got a major overhaul.

We talked some more and he asked if we'd help with his wife who has health problems. We told him we'd be glad to and exchanged phone numbers. I gave him some cards to the website. One of the things we stressed a number of times is that healing isn't a gift for just a few special people. It's something anyone can do, if they only believe.

Jonathan - if you read this, please leave a comment below and let us know how your shoulder is doing and give me a call so we can get your wife healed.