We had another great day with our friends in Brisbane. We met with Garth Lange, a Facebook friend that we desperately wanted to meet in person. We walked to Southbank and met him on a street corner. He drove us to a coffee shop that he and his friends hang out at. We talked about the kingdom of God for over three hours. He prayed for an injury I have and I prayed for his. Garth is truly an amazing man. I wish we could have spent the entire day talking with him.

As we walked to the car at the end of our meeting, we saw a man with a broken leg approaching. He was with a couple of friends. Garth & I decided to ask if he wanted to be healed.

He said he'd love that.

I placed my hand on his casted foot and commanded it to be healed. He felt tingling in his toes.

I commanded it to be healed a second time and asked him to check it out. All his pain was gone. We asked him to walk around and check to see if there was any pain at all. He took a few steps then flexed his toes and said there's no way he could have done that if it wasn't healed.

One of his friends remarked that she could feel the presence of God around her as soon as we approached and began speaking to them.
(They were all Christians)

We spoke to them about the goodness of God and I gave them a card to my website. We all walked away praising God. The man walked away without using his crutches. 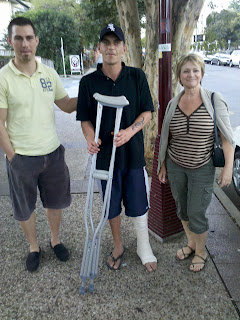 In the evening, we attended a meeting in Darra where I encouraged the street van teams to continue doing the great works they are doing. I taught a bit more on dreams, healing and prophecy. We saw a number of people healed of various injuries. We prayed over a woman with a spinal cord injury, who is in a wheelchair. She felt a lot of heat in her back at the level of her injury, but there was no noticeable movement of her legs.

She had some questions about why we aren't seeing many people healed with these types of injuries. I told there are a couple of things we need to overcome. One is that we usually give up too quickly, noting that in Africa, they'll pray over a person for days, while we pray for only a few minutes.

I also said that as a group, we lack the faith (or confidence) in God to see these things healed. Part of that is because we aren't actually laying hands on a lot of people in wheelchairs. But I told her that when we get serious about seeing them healed and are willing to go after healing with more passion, we'll probably see breakthrough.

We're having a blast in OZ.
God is so good.
Thank you for your continued prayer and support.

Related Posts:
The Three Monkeys
Posted by Prayingmedic at 5:39 PM