I really need to quit complaining about going on calls after shift change.

I've become aware that there are these divine appointments out there, waiting for me. Many of them show up at inconvenient times, like when I'd rather be at home eating dinner with my wife.

A few weeks ago, we transported a young woman who was suicidal. The call kept us past the end of our shift and I thought she would be my divine appointment.  I got to pray with her, and she later contacted me to say thanks, but there was someone else I needed to meet that night.

It was late and I was tired.  So when dispatch gave us another call, I got irritated and whined, "I've already done my good deed for the day...why can't we just go home?"

When I heard the patient had cancer, I began to think maybe this patient was the one.  As we walked past her room I could see her family huddled around the bed. Some were sitting. Others were standing. There was a somber presence in the room. I heard someone choke back their emotions as they spoke in a hushed voice. I knew she was the one.

I headed for the nurse's station to get report, but the nurse met me in the hallway. She told me about my patient and her battle with cancer. Rolling her eyes, she told me that the family had unrealistic expectations about the patient's prognosis. Some of them were holding out for a miracle. 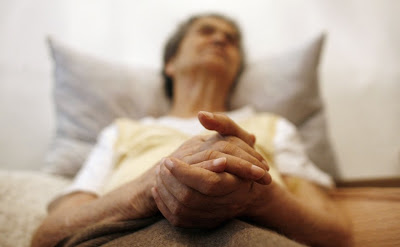 From the point of view of a doctor or nurse who's never witnessed a miracle, terminal patients die and there's nothing that can be done about it. That used to be the way I saw terminal cases. When you work in medicine and never see miracles, and you see people hoping for a miracle (the kind you've never seen), it seems like false hope or denial.

But people of faith, especially the ones who've seen miracles, have a hard time accepting the diagnosis of death. We know what that God is exceedingly abundantly able to do more than we can ask or think. That perspective makes miracles possible. And when you begin to operate in them consistently – it makes them normal.

I took an instant liking to my patient's son in law. He was warm man with a great sense of humor. We began making light conversation. There was a long discussion between the family about who (if any one) could ride in the ambulance. I said we'd try to accommodate as many as they wanted. So the patient's daughter and son both rode along.

We got her a loaded and I got down to business. I looked at her son and said, “I'll assume a from the report I got from the nurse that you believe in miracles.”

He looked as his sister. “Yes we do”.

I told him about some of the patients I’d seen healed. He began to cry. I asked if I might pray for their mother. They agreed and so did she. I placed my hands on her shoulders, and spoke blessings over her. I asked the Holy Spirit to bring His presence upon her. I commanded cancer, sickness and pain to leave.  I commanded evil spirits to leave. Her son continued crying.

When I was done, I told him that he can find me on Facebook. He pulled out his phone, opened the Facebook application, searched for my name and found a guy with a helicopter picture.

"Yeah...that's me. Send me a private message and I’ll send you a friend request."

They had questions about healing. They wanted to know how long they should pray and when the they should quit if they haven’t seen results.

I encouraged them to persist as long as it took and shared a few more stories about people who'd been healed only after receiving prayers for many years. I told them that has long as the person was still alive they should keep on praying.

I was able to write my report at the destination hospital, since I didn't have time to write anything but her vitals on the way. We got her settled into her room. I gave report to a nurse and said farewell to my patient.

I did see her again. I became friends with her family through Facebook. A few weeks later, I happened to be  at the hospital. Her daughter asked me to check up on her. She was resting peacefully. A few days later, she stepped into eternity.

Knowing what eternity is like, I'd be lying if I said I wasn't a little jealous.
Posted by Prayingmedic at 6:00 AM