Healing at the Home Show

The presence of God descend as the woman in the long black coat told us about rashes, bumps on her ankles and other health problems. I knew by His presence, God wanted to heal her. I asked if we could pray for her. She seemed reluctant; KC was Mormon. As my wife talked to her, I closed my eyes and saw a small candle surrounded by a vast darkness. I told her what I saw. She knew what it meant. We continued talking and building the bridge. I had something to deliver, but ministry flows through relationships. Before we could pray for her, she had to trust us. After she told us more about herself, she agreed to let us pray. I commanded the darkness to leave and light inside her to increase; this is Spirit led prayer. We spoke healing into her body and commanded sickness to leave. Almost immediately she felt different. She began checking out her ankles. A joy came over her and she began thanking us. But she expressed concern that her healing wouldn't last so we gave her some advice - we encouraged her to focus on the goodness of God and not her sickness, to continue believing she was healed, knowing the enemy will try to convince her it never happened and a few other strategies. After she was healed she took us around to meet other vendors who had sickness and pain. She introduced us to a man who had hepatitis C. He was on a list for a liver transplant. He was a Christian and gladly let us pray for him. These were the last two people we prayed for before leaving. (KC - it was a pleasure to meet you, please let us know more about your healing) 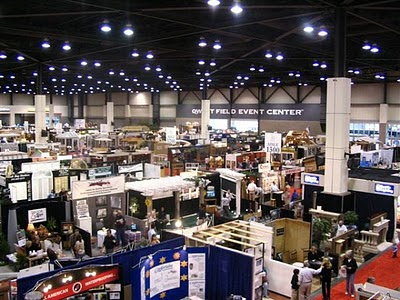 As we waited to buy tickets, my wife thanked me for going to the home show. Some of our friends were doing something like this tonight, and she knew I wanted to be there. But I love my wife and enjoy being with her regardless of where we are. Besides, I had the notion of smuggling Jesus in with me. Shortly after we arrived, we met a woman named Joan. As we talked, she handed me a mint patty. My wife declined and mentioned her gluten - intolerance. Joan had it. too. I shared a story from this blog about the woman from Redding who was healed of it. As we talked the Holy Spirit descended and I began to sway gently back and forth. Joan was a believer so we prayed, believing for a miracle. She gave us her card and thanked us. We hugged and departed. (Joan, you owe us a testimony if you were healed. :)

One way I know God wants to heal people is when I feel His presence increase. It's a green light that says 'go for it'. Later we met a man named Bill, a vendor for Conner remodeling. He teaches pottery and loves art. We talked about the product he was selling and about art. As we were ready to leave, he asked if we had our art on a website. I told him about this blog and about some of the testimonies I've posted. That made him curious. He told us about his knee replacement, carpal tunnel, torn rotator cuff and a few other problems he could live without. I told him we could pray for healing right now. He was a little uncomfortable having us pray for him in public, so I assured him I could do it quickly and discretely. I asked him to continue talking to my wife while I put a hand on his shoulder and prayed. He thanked us and gave us his card. We went by his booth later and he said he was beginning to feel better. (Bill, if you read this - let us know what happened )

One key to ministering to people in public is respecting their concerns. Some people are very modest and healing can become something like a circus. Keeping things low-key can help. There's a benefit you receive when praying for people. If God's presence is there, you're continually being filled with the Holy Spirit. I wouldn't normally be filled with joy, peace and love at a home show. But that night, I was.

Not far from Bill's booth we met Heather. She asked if we needed a security system for our house. We told her we already have one. I asked if she had any pain or sickness. She had neck and back pain from a car-accident. I told her what we were doing and she was happy to let us pray for her. (Heather - if you read this, would you report back on what happened?)

On my last shift on the ambulance I prayed for 3 patients. Two had terminal cancer, one had a spontaneous subarachnoid hemorrhage. I have no idea if any of them were healed and probably never will, and I'm fine with that. God touched all three with his love and that's what matters.

I've been convicted of not having the passion I should have for those who need to know about God. We're in a critical time right now. We can't afford to be lukewarm about the things of the kingdom. Some of my dreams have been telling me it's time to be on fire. So I've been stepping out of the boat more. My faith and boldness is growing, I hope yours is, too. The more I see people healed, the more I want to move in the miraculous.

I wanted to share one final revelation. My wife had a dream from God a few weeks ago. The interpretation was easy - the age of big-name healing ministries is coming to a close. This was confirmed by a word from a local prophet. We believe this word is seeing it's fulfillment now. We aren't saying that God is done using well-recognized people. But the anointing for healing is increasing on divine nobodies like me, who are on the streets and in stores healing the sick. God is willing to do miracles through anyone. Anywhere. No experience required.
Posted by Prayingmedic at 8:51 AM