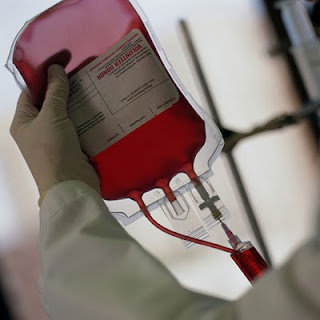 I looked at the registration sheet in the transfer packet. His religious preference indicated ISL; a follower of Islam.
My heart sank.
I thought, "there's no way he'll let me pray for him."
They were still copying records, so it would be a while before we could transport him to another hospital for dialysis and possible surgery. I went to his room to introduce myself.
Crammed into a room slightly larger than a closet I found Maurice, a man in his thirties with some big problems. After passing large amounts of blood in his bowel movements for three days, he reluctantly came to the emergency room. He'd managed to flush most of his blood volume down the toilet.
A normal red blood cell count (RBC) is between 4.5 and 5.5. His was 1.6. His hemoglobin and hematocrit were critical. The ER doc ordered a transfusion of 6 units of whole blood for starters.
Maurice was diagnosed with high blood pressure at 15. At the age of 18 he suffered his first stroke and spent 2 weeks in a coma. At 21, he developed kidney failure and learned about dialysis. My new friend had more medical problems than most men twice his age.
I explained my part in the continuing drama of his life. We chatted as I thought about how we would get him out of the tiny room and keep the lifeline attached to his neck from pulling out. An external jugular vein was the only IV access they could find.
Maurice was curious. The moment we got in the ambulance the questions began.
"Are the lights on?"
I said, "yes, but only on the left side, because people don't appreciate bright lights in their eyes."
"Not the inside ones, I mean the ones on the outside. Are the red lights on?"
I smiled and asked if he thought we needed them. He said, "I don't know, what do you think?"
I explained that we don't use red lights much between hospitals because most of the patients are stable. We talked about the benefit and risk of running red lights and siren. But I shared the story with him about the woman we transported earlier in the day who was in premature labor. "We don't like delivering babies in the ambulance."
"What's the difference between an EMT and a paramedic?"
I explained.
"What's the difference between a paramedic and a nurse?"
More explanations.
I really liked Maurice. He was a pleasant man in spite of his medical problems and he laughed at much of what I said. He didn't fit the stereotype of Muslims that I'd built in my mind. He was strangely....very much like me.
In explaining the differences between paramedics, EMT's and nurses, I told him that I was a little different from most medics because I saw patients healed in my ambulance.
With a puzzled look he delivered his next question, "what do you mean healed?"
I told him a few stories about patients who had been healed. Now he was even more curious.
"Can you do anything about my headache?"
I asked how bad it was. He said it was very painful, about 8/10. I told him I'd command it to leave. I placed my hand on his head and commanded the pain to leave in the name of Jesus. Then I asked how he felt.
"A little better"
I put my hand on his head again and commanded the pain to leave then asked how he felt.
"A lot better."
I did it one more time and he said, "It's gone...completely gone." He was smiling from ear to ear.
I said, "Jesus just healed you."
He said, "I only have one problem with Jesus. He was a good man and all, but he wasn't God. The bible even says no man has seen God at any time. But Jesus was seen by the multitudes."
I opted out of the argument and went for more healing. I told him God healed his headache because He loved him. The healing was proof of it. I told him that God could give him new kidneys, and heal his GI bleed and blood pressure. He let me continue praying.
I placed my hands on his abdomen and commanded the bleeding to stop and for his kidneys to be healed.

In the middle of praying it occurred to me to share the story about the visitation Bonnie Jones had where she was in a warehouse in heaven filled with spare body parts. She was told that the organs could be put in people on earth who needed new ones. When I was done declaring healing over him, he told me about what happened when he was in a coma for two weeks after the stroke.
"I want to tell you about this experience. When I was comatose for two weeks, I had a very strange thing happen to me. I was in some kind of warehouse and someone was with me. I didn't see them. I don't know who it was, but I felt comforted when I was with them. The one who was with me kept saying I would be OK. They said everything would work out. They told me my journey was not done. I had an assignment that must be completed."
We talked about the experience. I suggested that it was a near death experience like many that I'd read about and that the one who was with him was the Spirit of God. He didn't argue. Nothing in his knowledge of Islam could explain the experience. I told him a little bit about the Holy Spirit in the short time we had.
We arrived at our destination and moved him to his ICU bed. I gave report to the nurse and left out the fact that his headache was healed.
I learned so much on this transport. My view of Muslims was destroyed. I'm working on a new one. I realized they might be the perfect people to demonstrate healing with. They believe in God and they like prayer. They just have different interpretations of them.
What Maurice needed was someone to love as Jesus loves and heal as Jesus heals. We tend to believe that people of others beliefs have never had true spiritual experiences or encounters with God. My new friend had a profound heavenly experience most of us will never have, this side of heaven. What he needed was someone he trusted to give him an interpretation of it.
Two days after transporting Maurice, I went to the ICU to check up on him. He gave me permission to tell his story, but we agreed to change his name. We talked for quite a while and laughed a lot. He allowed me to pray for healing of his kidneys again. When I asked what the doctors found on examining him for bleeding, he told me that they ordered all the usual tests - both endoscopy and abdominal scans and found no signs of bleeding. The only reasonable conclusion is that Jesus healed him.
Posted by Prayingmedic at 6:00 AM