The Kingdom of God Revealed - A Dream

I've been a Christian for a little over 10 years. In that time, I've learned a great deal about the church. But only recently have I understood anything about the kingdom of God. I've been asking the Lord to show me this mysterious kingdom I read about in the bible. Lately, I've been having dreams in which God has been illustrating different parts of the kingdom. Some of those dreams have become notes. It's always hard to know who to tag in a note, because I write on different subjects. There is a feature you can use to subscribe to anyone's notes, if you wish. Click the blue button under 'subscribe' in the left hand column next to a note and you'll be notified when that person publishes a note.

I had a rather profound dream about the kingdom of God last night. I wanted to share it with you. 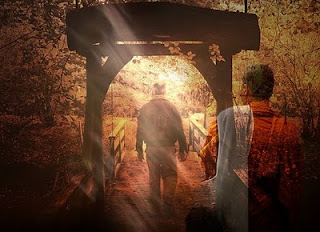 In the dream I watched as different people experienced the kingdom of God. I was one of them. The first person I saw was a friend named Pete. He was living as a drug addict, heavily involved in criminal activity. His life was one of watching for the police everywhere he went and living in fear of being arrested. He lived to have his own selfish desires met. It was a life of fear, selfishness and using others. He didn't make a positive impact on a single person. He had no rest and no freedom. It seemed like a miserable life.

Then I saw him enter the kingdom of God. He was dressed in a uniform, sitting on a stool at the opening in a wall. The wall separated a prison and the kingdom of God. The opening was a like a gate, without a door. It was about 4 feet wide. Pete was a guard. He got up and walked around in the kingdom which seemed like an endless expanse as far as I could see. He was exploring this new place. He looked for familiar things like what he experienced in the world but found nothing like those experience.

There was no crime or drugs and no police. Everywhere he went he experienced freedom. He could walk anywhere he wanted and there was no fear or guilt. He was never afraid of getting caught doing something wrong – nothing wrong ever happened in the kingdom. All his needs were met and he was filled with peace. He met the Father who had only good things to say about him. The Father provided everything he needed in the kingdom. Pete went back to the stool and sat at the gate. His new position was to tell anyone who asked how they could enter the kingdom. His life was profoundly changed by his experience. Although the daily problems of his life didn’t immediately disappear, Pete began living from the reality he experienced in the kingdom. The freedom and acceptance he found in the kingdom allowed him to live free in the world. He never lived in fear of anything again.

I was also in the dream. In the world I was looking for acceptance and to be understood by others. I sought popularity and wanted people to like me. That was until I entered the kingdom. In the kingdom, I found immediate acceptance. Everyone I met seemed to instantly understand me. Even more amazing was the fact that they all liked me. I had no enemies and there was nobody I didn't get along with. I never argued with anyone. I made friends everywhere I went. When I met the Father, I encountered absolute acceptance and love. He had an endless list of wonderful things to say about me. I was the apple of His eye. Everything I did was perfect in His sight. He could not be more proud of me. This experience profoundly changed how I lived in the world. I no longer went around seeking acceptance from others. I lived from the reality I had experienced in the kingdom and never again wondered if I was good enough.

Another person appeared in the dream. I don't recall who this person was, but they seemed to be another friend, who lived with the fear of never having enough money. Although they had a good job and invested their money wisely, they lived with a nagging fear of poverty. Thoughts about earning and saving money plagued them continually. This person also entered the kingdom of God.

In the kingdom, they traveled from place to place. Money was the last thing anyone worried about. In fact, there were no worries of any kind in the kingdom. Citizens of the kingdom had piles of cash. My friend found that they could easily get as much money as they wanted from any stranger on the street. Nobody hoarded money. No one cared how much they had or how much they gave away. There was abundance for everyone. This experience in the kingdom profoundly changed the way he lived from that time forward. Experiencing the provision of heaven and knowing that God’s economy never lacked resources, gave him a freedom with money he never thought possible. Their fear of poverty instantly vanished. He began living from the reality he experienced in the kingdom and began to give abundantly with gladness.

I hope you're encouraged by this dream. The kingdom of God is within and around you. I hope we will all live from the unseen reality of God's eternal kingdom.

Posted by Prayingmedic at 5:40 AM