If you've followed this blog for any length of time, you've may have wondered what my partner thinks about all this healing stuff. Today, you'll get an inside look at what's going on in his life.
I'll be honest - I don't really know if he's a Christian or not. I've made too many wrong assumptions about that in the past, so I try not to categorize people any more. He believes in God. I'll leave it at that for now.
He's seen the power of God at work more than most people. He's witnessed miracles with our patients and he's been healed at least a dozen times of things like neck, back, knee and hand pain. He's one of the most accident prone people I've ever met - I think his size 14 feet have something to do with that.
He doesn't go to church. But we work a lot of weekends, so neither of us have the opportunity to attend every weekend, even if we wanted to.
Since we began working together 2 years ago, he's had a number of dreams from God. We always talk about what God is saying to him in dreams and he appreciates that.
I've never tried to lead him in the sinner's prayer. It's not something I routinely do and I've haven't had a leading from God to do it with him.
Much of what he knows about religion he gets from the history channel. A few months ago, he watched a program on the subject of hell. We had a long talk afterward.
He asked what I thought hell was, why some people went there and why others went to heaven. It was the open door I had been waiting for. He already had enough information to believe in hell. I agreed that it was a real place and steered the discussion into matters he'd never discussed with anyone. We talked about the concepts of judgment for sin, the atonement for it by the death of Jesus, the nature of God's mercy and the forgiveness of sin through His grace.
It all made perfect sense to him.
A few months ago, he was having knee pain in the middle of the shift. After I asked him about it, he confessed that he went for a 3 mile run before work and probably shouldn't have. I told him to put his hand on his knee and command it to be healed, like he'd seen me do a hundred times.
He said he tried that already, but it didn't work. So I placed my hand on his knee and commanded it to be healed. It took 4 times, but he felt a warm sensation and in a few minutes all the pain was gone.
I asked how many times he tried to heal his knee. "Well....just once."
I'm glad he tried, even if he wasn't successful. I didn't know this, but apparently, he's been learning things by working with me. He's probably not even saved yet, but he's trying to do things I didn't attempt until I'd been saved for 7 years. 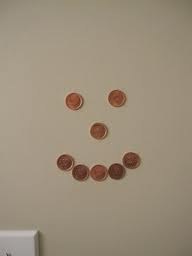 Two weeks ago, I began sticking pennies to the walls at the hospital while waiting for paperwork to be copied, IV's to be pulled, phone calls to be made and patients to eat before we could transport them.
My partner thought that was a neat trick. I told him "It's not a trick. It's the power of God at work. The same power that heals our patients, also holds the pennies to the wall. It's faith in action."

That day I stuck a dime to the wall outside the ER. Speaking so he could hear me, I asked God to hold it there and walked away, but I glanced at him over my shoulder as I did. When the dime finally fell, he picked it up. He held it to the wall and asked God to hold it when he let go. And it stayed there. He smiled and said, "Well I'll be a son of a bitch!" (Words of praise to God among those who don't know Him yet)
I stuck some pennies to the wood door at our station last week, just to encourage him. The next day, after I put the ambulance away at the end of the day, I came inside to clock out and saw two pennies stuck to the door.
He looked at me and explained: "I decided I'd try it scientifically. I held the pennies up and didn't pray or ask God to hold them there. I thought maybe it was the paint or some scientific thing that was really doing it. But they wouldn't stay there, even for a second. So I put them up again and asked God to hold them there and they've been there for 10 minutes."
I smiled and said, "like I told you, it's the power of God at work."
My partner is in the process of learning about God, by being around me. Some of it comes through dreams, some though healing, some through signs and wonders like coins on the wall and some by conversations about life.
Will I lead him in the sinner's prayer? I don't know.
But whether he knows it or not, he's already being discipled. And Jesus did tell us, "Go, and make disciples of all nations."

Posted by Prayingmedic at 9:00 AM