The Chaplain and The Medic 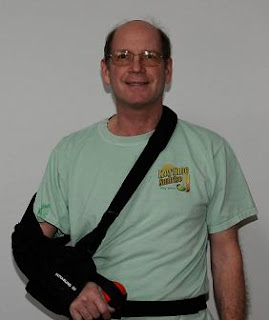 Early in the morning, a middle aged man walks a deserted hospital corridor. Another man sees him and smiles, noting that his arm is in a sling.

Walking over, he stretches out his hand. "I see I might be too late."

They shake hands awkwardly as the one with the sling is unable to extend his right hand, and his left hand is carrying a small pile of books. The sling is a result having surgery to repair his shoulder.

The procedure didn't go well. Already plagued with low back pain from bulging discs and chronic knee pain from mountain biking, the less than successful surgery had the potential to force some unwanted changes on him.

"I was going to ask if I could pray with you, but if you already had surgery, maybe you don't need to be healed. I've been praying with a lot of my patients and a lot of them are healed."

The chaplain said, "Really? Well, God must have given you a gift."

The medic smiled and explained that it's not really a gift. "Although there is a gift of healing mentioned in the bible, healing miracles are available to every disciple of Jesus. He gave His disciples authority and power to heal. I've just learned how to operate in it, but anyone can do it."

The medic and the chaplain discussed healing and the medic shared a lot of testimonies. In the end, they both wanted the same thing. The medic wanted someone to pray with and the chaplain wanted to be healed. Neither one knew what the other was looking for.

"If you don't mind, would you pray for my knee?"

A fire department crew walk quickly through the hallway with a patient on a gurney. A young woman with them looks at the medic, smiles and says, "I know what you're doing."

The medic looks at the chaplain. "That's my partner."

He invites the presence of God to come and feels the atmosphere change then placing his hand on the chaplain's knee he commands the spirit of pain to leave. Next he commands cartilage, ligaments, bone, nerves, tendons, blood vessels and muscles to be healed. "All things brand new, because God doesn't recycle, He makes all things new."

The chaplain said he didn't really feel any different. He bent down but there was still pain and no real change. The medic told him sometimes the healing can take 10 or 15 minutes, sometimes an hour or two and sometimes even a day or two. He repeated the process two more times.

With a smile, the chaplain said, "I'm feeling something happening in there now. Would you mind praying for my back?"

Placing his hand on the chaplain's lower back he repeated the same process as with the knee. After the third time, the chaplain reported a lot of heat in his back.

"That's the power of God healing you."

The chaplain told the medic that the surgery on his shoulder didn't go well. "The doc said it's bone on bone. I'm eventually going to need another surgery to replace the joint."

"Why don't we have God replace it right now?" Placing his hand on the injured shoulder, the medic said, "I command the spirit of pain to leave and for the bones, cartilage, ligaments, tendons, nerves, blood vessels and all the structures of the shoulder to be healed in Jesus name." How does it feel?"

The medic repeated the process two more times and asked what was happening now.

They talked some more. The medic gave the chaplain some cards to the website and told him to drop by and check out the testimonies and teaching on healing.

The chaplain said, "You know, if you took this far enough, you might put the hospital out of business."

The medic chuckled and mumbled to himself as he walked away....."Put the hospital out of business....that's a good one."

Charles, it was a real pleasure meeting you. Let us know how you're feeling?