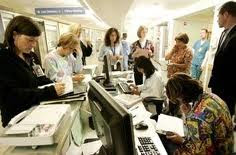 We sat outside the ER waiting. We work a day shift, so we don't have a station. We sit in our ambulance in parking lots and on street corners. After hours of waiting, we finally got a call, so we grabbed the gurney and went inside.

As we approached the nurse's station, a respiratory therapist held out his thumb to the ER doc.

"Hey doc, can you have a look at my thumb? It hurts like crazy."

I felt like I was walking onto a stage. The director had rehearsed the script with the actors. And now it was time for the medic to say his lines. Another set up.

God, why do you do this to me?

I walked over and listened to the doc...."Well, it doesn't look broken. What did you do to it?

"Well, there's nothing I can do", he mumbled as he walked away.

I walked over to the RT

"No, I didn't do anything. It just started hurting."

I checked it out....no deformity, no signs of trauma. "How bad is the pain?"

"Do you want to be healed?"

"What are you gonna do, some kinda...."(he makes the sign of the cross and sarcastically rolls his eyes)

The nurse sitting at the desk piped up..."I wanna see this!"

I invited her to watch. When she could see what I was about do , I asked if he wanted to be healed. He said, "Yeah - go for it."

I placed my index finger on the part of his thumb that was in pain and commanded the pain to leave, in the name of Jesus then asked how he felt.

"A little better." (Now he was smiling)

I told the pain to leave a second time (in Jesus' name) then told the tendons, ligaments, nerves and bones to be healed. I often use this approach when I'm not sure what the exact problem is. "Move it around, how does it feel?"

He was smiling from ear to ear now, amazed at what God was doing. 'Well...that's weird. It feels pretty good.

"Is there any pain at all?"

I told the pain to leave one more time and had him check it out.

"Well, now there's no pain at all. But my other thumb hurts."

Thinking that maybe a spirit was moving around causing the pain to move, I asked, "Are you serious?"

He began to laugh, "Nope...just messing with you...It feels great."

We both began laughing. (I just love these set ups, by the way) Putting my hand on his shoulder I said, God's pretty cool huh? I gave him a card to the website.

"If you have any questions, you can get a hold of me here. I need to go get my patient."

We talked with the nurse, got report and loaded our patient. He was a Fedex driver who passed out while driving on the freeway. He crossed three lanes of traffic and hit the barrier between East and West bound traffic. The truck eventually came to a stop. No one else was involved or hurt. He suffered glass cuts and a subdural hematoma, but was otherwise fine. We transferred him to a larger hospital for a neuro consult.

On the way, we talked. I told him what had just happened with the respiratory therapist. The Fedex driver felt like God had already given him a miracle by keeping others from being injured in the accident. But he let me pray with him to have the hematoma and the headache healed.

Some days God orchestrates our lives down to the most intricate detail and exact second. Maybe that's what it means when it says "the steps of a righteous man are ordered by the Lord". I don't feel particularly righteous. I just feel blessed to be a part of a divinely written play where the Holy Spirit is the director and Jesus is the real star.