A Second Chance at Healing 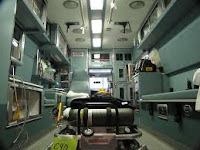 Amy (not her real name) was in our new employee orientation class. When we told the group what we did, she said she was a detail technician. I didn't even know we had detail techs. Her job is to clean up after me. When we cover the ambulance in mud, she washes it. When we leave fast food garbage on the floor, she cleans it up. My mother doesn't work here, but Amy does and I'm glad we have people like her.

We both worked on the west side of Phoenix in Glendale. On October 17th 2011, early in the morning as she made her way out to the wash bay, I noticed that she was limping and asked what was wrong. She showed me her painful, swollen knee, wrapped in a support device. I asked if could pray with her to be healed. With some fear about what I planned to do, she agreed. I prayed over her knee three times but she felt nothing.

On the same day that I prayed with her, I prayed with a different co-worker, who had a partially torn Achilles tendon and back pain. He was healed, but she wasn't. That story can be found here.

That day and for a few days following, I asked God why one person was healed and the other wasn't. Here's what I heard:

The man with the Achilles tendon injury was healed because he gladly received his healing without fear or worry. Amy was afraid I would hurt her and that fear prevented her from being healed. It wasn't that God could not heal her. It wasn't that He didn't want her healed. It was because she could not receive healing in a state of fear.

I was disappointed. I really wanted her to be healed. I've seen her a few times since then and she still walks with a limp.

On December 2 2011, I worked an overtime shift in Mesa. Amy saw me loading my gear in the ambulance. She came over and asked why she wasn't healed.

We sat on the couch in the day room. She showed me her swollen knee, wrapped in a black elastic bandage for support. I asked God to bring his presence upon her then asked what she felt.

"I feel really relaxed and at peace."

I commanded the swelling, inflammation and pain to leave and commanded the ligaments, tendons, muscles, nerves, cartilage and bones to be healed. She felt heat, which increased each time I prayed over her knee.

While her knee was being healed I taught her about the battle over healing. I warned her that the symptoms might return, told her to stand in faith and believe she was healed and to command the symptoms to leave if they returned the same way I did to make them leave. She seemed to understand.

I saw Amy yesterday. It's been three weeks since she was healed. I asked how her knee felt. She said it felt great. I asked if she was serious. With a smile, she looked at me and said, "Yeah - it feels great!"


When Amy wasn’t healed, the easiest way to explain the lack of healing would be to assume that God didn’t want her to be healed. The fact that she was healed at a later date demonstrates that it wasn't a problem with God. It was a problem with man. Unfortunately, we often blame God when healing doesn’t happen. But that should be the last explanation we consider.

The most likely explanation for failed healing is our own lack of faith. The next thing to consider is that some obstacle may present in the life of the one we’re praying with that needs to be removed. Sometimes it’s a spirit of sickness, sometimes it’s an attitude toward us or God that needs to change. In this case, it was fear. Once the fear was removed she was healed.

Healing is meant to draw people into a loving relationship with Jesus. Fear and love don't work well together. We are representatives of God and His kingdom. If someone fears that we're going to hurt them, that fear can become generalized. They may fear that Jesus will hurt them or that Christians in general are out to hurt people. Our best approach in dealing with fear is to assure them they have no reason to be afraid of us or God by demonstrating His love and compassion toward them.

Perfect love casts out all fear.

Posted by Prayingmedic at 8:13 AM