Covered By The Blood

As Shante slept soundly, an invisible voice whispered her name in the darkness.

She awoke and scanned the room, looking for the one who called her name, but found no one. Looking a second time she realized her husband was missing.

Slipping on a robe, she made her way to the bathroom, located on the other end of the house. She opened the door.

Her husband lay naked in the bathtub. His arm bled profusely from a deep incision across his brachial artery.  Both wrists were cut. His blood flowed freely, turning the bath into a crimson pool of death. 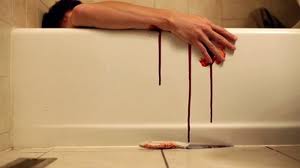 Shante knew what to do. This wasn't the first time. She called 911 and tried to wake him.

The men in uniform made quick work of getting him out of the tub and on the way to the hospital. After a unit of  blood and 3 liters of saline in the ED, his pressure was still around 60/30. They had another problem. The hospital had no ICU beds open.

We arrived to transport him to the nearest hospital with an ICU bed. His nurse filled me in. They applied a pressure dressing to the open brachial artery and checked it before we arrived. It was still bleeding. His blood pressures had been horrible in spite of fluid resuscitation, although they'd only given him one unit of blood. He was a rare type and they had no more available.

He was restless and in pain. His physique was that of a bodybuilder. For a man pushing 60 years old, he looked like he was in good shape.

The inside was a different story.

I'm always saddened by suicide attempts, but some are worse than others. It's not unusual for a 17 year old girl to take a handful of pills after breaking up with her boyfriend. She's hurting. She wants attention and she knows how to get it. These gestures are pretty harmless and most people outgrow them.

But when you have grown children and grandchildren, you're supposed to have most of this stuff figured out. I can't think of anything sadder than a man who's been walking the earth for over 50 years who's still in bondage to his demons. Especially when he's a Christian.

Didn't Jesus came to free us from all of this? How is it that so many people come to the cross and receive salvation, but live the rest of their lives tormented by thoughts of ending their life?

I talked to his wife and asked if I might pray with him. She said he'd appreciate prayer then told me about how she found him in the bathtub. She was sound asleep at around 2:30, when a mysterious voice called her name in the night. There was no one around. We concluded it must have been an angel. I told her that God has been healing a lot of  my patients and that He's been teaching me about healing mental illness. I didn't make any promises, but told her I'd do what I could to help him.

We loaded him in the ambulance. His son got in and sat next to me. I can't imagine what a 30 year old man would  be thinking as he watched his father try to end his life.

I prayed for peace to reign in his heart and commanded evil spirits to leave. "Holy Spirit, bring your presence to rest upon him and give him joy, unspeakable. Papa, show him your amazing love and mercy."

He finished the prayer with me..."In Jesus name."

We arrived and whisked him to the waiting ICU nurses and got him settled in. His wife was waiting in the room for us. I put my arm around her shoulder. She gave me a squeeze and said, "Thank you."
Posted by Prayingmedic at 6:00 AM