Healing In The Workplace

This is an excerpt from my upcoming book on healing.

The first ten verses of Luke 5 describe what happened to Peter when he allowed his workplace be a platform for the ministry of Jesus. After the Lord taught from Peter’s boat, he asked Peter to go into deeper water and let down his nets. After telling Jesus he’d been fishing all night without catching anything he reluctantly obeyed. He was astounded when the catch was so great it began to sink the boat, requiring help from others to bring it in. God blessed Peter, James and John with an immediate increase in their business when they allowed their occupation to be used by him. Just as he did with the fishermen, God wants to bless us when we’re willing to be used by Him where we work.

One day, while working on the ambulance, my regular partner took the day off. I worked with someone I didn't know very well. ‘Cindy’ and I were having a slow day. We were five hours into the shift and hadn't run a call. To help the time pass, we talked about different things, including one of my favorite subjects; dreams.

I shared a few dreams I’d had about healing. That led to a discussion of healing itself. I shared a few healing stories, which prompted her to tell me about the car accident she was in a few years ago that left her with chronic pain between her shoulder blades. We talked and I gained her trust. So when I asked if she wanted to be healed she was comfortable having me pray with her. I explained the process then put my hand on her back and commanded it to be healed. And it was.

In ministry, it's helpful to build relationships. Before asking someone if they want to be healed it’s wise to spend a few minutes getting to know them. The degree to which you’ll minister to anyone is dependent on the relationship you have with them. Some Christians have turned ministry into a game of numbers, boasting about how many people a day they’ve reached for Jesus. Many of those converts remain strangers to the believer and God. Society has grown tired of it. Christianity devoid of meaningful relationships is empty and its fruit doesn’t last. Jesus asked us to make disciples, not converts. Discipleship is relational.

If the one you want to pray with is someone you know, the relationship may already be strong enough for prayer. Asking a stranger if they want to be healed isn’t something most people do. It’s natural for them to wonder about our motives. With a stranger it’s helpful to engage in safe conversation, allowing them a few minutes to evaluate us and our motives. You should expect to have your motives questioned. Spend time thinking about why you’re doing this and how you’ll explain your motives when asked.

As we minister in the workplace, we should remember a few things; Jesus healed all who came to him, but many chose not to come. As badly as we may want others to receive God’s healing touch, we must always ask permission and respect the wishes of those who say no. If we show honor and respect, it will be shown to us, even from those who disagree with us. “When a man’s ways please the Lord, He makes even his enemies to be at peace with him.” (Proverbs 16:7)

Another thing to keep in mind is that employers hire us to work and they have a right to expect us to be productive. We should desire to make our employers successful. If we spend too much time engaged in ministry while at work and it interferes with productivity or proficiency, they may need to take corrective action. We should treat customers and co-workers well and be diligent in our duties. When we’re good employees, we fulfill the command to “do all things as unto the Lord”.

A generation ago, it was common for people to talk about their faith in the workplace. Today, separatists and secularists are trying hard to ban public discussions of faith. Workplace evangelism is becoming a risky proposition. In some parts of the world discussing Jesus puts you at risk for harassment, punishment or termination. Many people believe we have no right to engage in religious discussions while on the job. Make no mistake there will always be a cost that must be considered by outspoken disciples of Jesus. 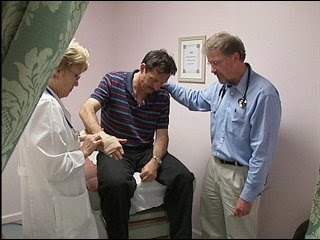 At the outset, I had concerns that God wouldn’t heal the people I prayed with and I’d look foolish. Concerns about how we’re perceived by others are sometimes rooted in pride. In this case I had to choose obedience over what others thought about me. Humility allows us to take risks at the expense of our ego. My fears were short-lived. I did go through a season of praying with people who weren’t healed, but not because God didn’t want them healed. It was because I didn’t know what I was doing yet. After changing my approach and commanding healing instead of begging God to do it, I saw the number of people healed increase dramatically. I never really experienced the things I feared. I suppose the enemy may have been trying to discourage me. He’ll probably try it with you, so be brave if God asks you to step out in faith.

Operating as a divine healer in the workplace can be a challenging task, but the rewards are profound. When I began I met a few people who objected to a paramedic praying with patients while at work. I had a discussion on a medical blog with a doctor who was offended when she learned that I talked to my patients about God. In her mind my actions were unethical. She believes that patients are vulnerable and see medical workers as experts. Her fear was that I would abuse my ‘expert’ status and push a vulnerable patient into accepting a religious point of view, without having time to fully consider it. I suppose some may operate this way, though it seems rather manipulative. There is no reason why open discussions can’t occur which allow both people to share ideas without crossing the lines of sound ethical practice.

Rules regarding discussions of faith vary depending on your occupation and where you work. Check to learn what restrictions apply to you. The medical industry allows for some people to discuss faith openly with patients. If you’re on the pastoral staff you’re allowed a lot of freedom. These positions enjoy a privileged status the rest of us don’t. There seems to be a trend toward more restriction on workplace discussions of faith. This trend needs to be challenged and the responsibility falls on us. If you work in a place where you aren’t free to talk about God, it’s your responsibility to engage in discussions with management to have the rules changed.

If our attempts to bring Jesus into the workplace cause customers to go elsewhere or co-workers to file complaints against us, perhaps we should re-think our strategy. After years of ‘witnessing’ to people on the job, and having no fruit come from it, I began instead to discuss healing. In the time I’ve used this approach, which I use almost daily, I haven’t had a complaint from anyone. Many have been healed, and even the people who weren’t were grateful.

There are a thousand ways in which healing can be brought to the workplace. The only limitation is our own creativity. Healing is often used as a tool for evangelism, but it’s also a gift of the Holy Spirit and the gifts are intended to benefit the church. I tend to operate more in the gift of healing with believers than in healing as an aid to evangelism.

I keep my eyes open for anyone who is walking or moving in a way that shows they are in pain. I look for immobilizers, canes, crutches, and wheelchairs or a look of pain on anyone’s face. If I see someone taking Advil, I ask why. I’ve also developed selective hearing, where I tune into certain conversations and tune others out. I listen for medical words. After a bit of practice you become more perceptive to the needs of others. One day you’ll realize that asking a stranger if they want prayer is no longer considered ‘risky behavior’, but a normal activity.

It’s surprising how many people discuss their health problems in public. When someone discusses a surgery, a chronic painful condition or even something like insomnia, there’s a need for healing standing in front of you. All you need to do is politely ask about the condition, maybe share a testimony of healing and ask if they’ll let you pray with them. After a few people are healed, your co-workers will begin to talk. As word gets around, you’ll find more opportunities. As more people are healed, your faith will grow and you’ll probably see more miracles. If you’re experiences are like mine, co-workers will start coming to you first, before making an appointment with their doctor.

The disciples of Jesus became habitual healers. They kept routines and visited certain places often. And wherever they went, the sick were healed and the dead were raised. They became so well known for healing, and their routines so regular that people laid the sick in their path, knowing that as their shadow passed by, sickness and disease would leave. There’s nothing keeping you from developing this same kind of reputation for healing. It’s a matter of how much compassion you have and how closely you want to follow in the steps of Jesus.