We arrived to transport Alfred. From his ER bed, he sent another text message. His wife gave him a hug and his nurse gave me report. He came in because he'd been having chest pain for 2 days, but according to the nurse, he hasn't had any since he arrived. His cardiac enzymes were slightly elevated so he was being transferred to a hospital with cardiology services.

His chief complaint now was a killer headache. I introduced my partner and asked a few questions.

"Hi Alfred....are you having any chest pain now?"

"No, just a real bad headache."

His wife interrupted. "Why don't you tell them about the chest pain?" 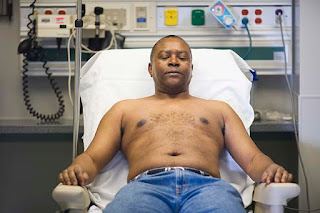 I glanced at his face sheet and found the box for religious preference. He was a non-denominational Christian.

"This oughtta be good," I thought.

We got a set of vitals and got him loaded. After we were underway I took a seat next to him.

"Hey, Alfred, I have a question for you....would you like me to pray with you?"

He agreed. The smile on his face was priceless. My new friend has been under a lot of stress lately. Much more than he's used to. The chest pain only made things worse. Now he had his health to worry about. I asked how bad his headache was. He rated it at 8 out of 10.

I placed my hand gently on his shoulder and asked the Holy Spirit to bring His presence and touch him.

"Spirit of pain, I command you to leave. Holy Spirit, touch him with your power and remove all sickness and pain from him. I bless your work of healing and Lord, I thank you for your mercy."

I went on for a few minutes then asked what he felt.

"No, I'm not lying. As soon as you put your hand on me and started praying, it left. It was like...two seconds later."

We both smiled and laughed and started talking about how amazing God is. Not only was his headache gone, but so was all of his anxiety and fear. All of it. Instantly.

He was the third person I prayed with this week who described an overwhelming sense of peace come over him when we prayed. The Prince of peace is making himself known.

We talked the rest of the way about healing, the kingdom, and the goodness of God. I taught him what I could about faith and healing and what to do if the symptoms returned. I gave him a card to the website and told him to leave a comment if he had time.

We dropped him off at the other hospital...a new man. When he left, he was a nervous wreck. When he arrived, he was smiling and laughing. His wife must have wondered what happened to him along the way.

Jesus happened to him.