This is the story of a man who was healed of an inoperable brain tumor in Montreal, Canada in 2009. The testimony below was written by the patient's son. The radiology images below show before and after films. The tumor is evident near the arrow in the left image. There is no sign of it in the image taken a few months later on the right. 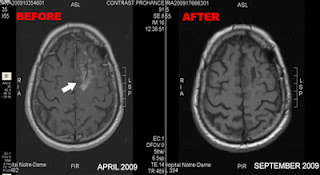 “My father who was 54 years old and the associate pastor of my church in Montreal, was diagnosed with a brain tumor in April 2009. The doctors said they couldn’t operate due to the fact that the tumor had spread over the brain and the risk of brain damage or death was too great. That is when our church began to pray and stand on God’s word, Mark 9:23 “all things are possible to him who believes.”
In the month of September 2009 the doctors finally agreed to perform another brain scan it would be one week after you (Michael Koulianos) came to preach at our church. My father also testified that after you prayed for him he felt as though his head was on fire and could actually smell something burning in his head. We believe that was the power of God burning up the rest of that tumor.
The next week when my father went to the hospital for his scheduled brain scan it took the hospital almost 2 weeks before they gave us the results. The reason it took so long was because the tumor was completely gone and the doctor couldn’t believe it so he sent the results to 4 other doctors to get their opinion on the results and they all conclude that the tumor is completely gone. Now the hospital wants to write a story about my father’s situation and his personal doctor told him that it was a miracle.
I thank God for what he has done in my father’s life.”
Thanks, Pastor Daniel DiPaolo
The original post of this testimony can be found here
Posted by Prayingmedic at 6:00 AM