My Partner Was a Door Gunner 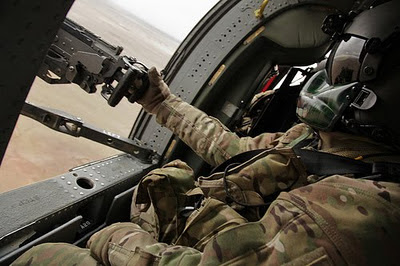 Not all EMT's discover their calling straight out of high school. Some of us take a few detours. The guy I worked with today took some interesting ones.

My normal partner is gone for a while on another assignment. My temporary partner called out sick. So today I worked with a rover; a guy who doesn't have a regular partner or unit. For a rover, every day it's another partner (or two) a different ambo and a different side of town.

As twilight approached and I loaded the gear, six o'clock was drawing near and so was my partner. He'd been an aircraft mechanic for years and loved being around anything with wings or rotors. One of his former jobs was working on helicopters for the army. He also spent time on the trigger of an M-60 as a door gunner over Iraq.

We got in service and headed to our first post assignment. We both needed coffee. Arriving at the parking lot, we called dispatch and were assigned to a different location. Back on the road, we chatted about jobs, friends, good times, marriage ups and downs, kids, and the painful memories that come with the kind of work we do.

He told me that the last time he was deployed, his wife didn't object to him going overseas. He thought it was odd, but he didn't ask why. A few days after he hit the sandbox, she filed for divorce. He's been driving back and forth to court hearings in LA and he doesn't have a penny to his name right now.

After chatting with a buddy who deployed with him to Afghanistan (who's life was saved by his quick thinking) he decided to go to EMT school. This was his first job in EMS. He'd been with the firm for two months, just like me.

He had no idea he was going have an encounter with God in less than an hour.

We found a spot that would provide shade during the heat of the day and wi-fi access for my laptop. Bloggers need to stay connected to the mother ship and I had some serious writing planned for today, if time allowed.

We make our plans.

And God makes His.

A few minutes later we got a call to downtown Phoenix. Traffic was picking up and the freeway was a parking lot so we took surface roads. On the way, he told me about this pain in the middle of his back.

Stop me if you've heard this one before....

I asked how long he'd had it and how bad it was. I told him a few stories about healing before we arrived.

I asked if he was sure.

"Okay, why don't we get you healed before we go inside."

I placed my hand on the middle of his back, asked the Holy Spirit to bring His presence and power and commanded the pain to leave and for the muscles to be healed then asked what he felt.

"That's crazy. I feel tingling all over my back!"

"That's the power of God healing you." I repeated the process and asked what he felt.

"Wow. This is really crazy. It feels pretty good now."

I asked if there was any pain. He reported a little tightness, so I repeated the process one more time and asked what he felt.

He twisted as far as he could to the left then right, bent backward and forward trying to see if he could make the pain come back. "There isn't any pain at all! Man...this is crazy!"

We went inside and transported our patient, who had a hole in her heart. She was going from one hospital to another for surgery to close up the hole. She was nice, but rather large. At 348 pounds, we should have called for a bariatric gurney and another crew for lifting help. But my partner was up to the challenge, having just been healed by God.

He spent the rest of the morning twisting from side to side every time we stopped. Every time he checked, there still wasn't any pain and he exclaimed, "Man...this is crazy!"

We talked about God. I told him about Jesus and the Holy Spirit. The cool thing about divine healing is that it allows God to be the topic of conversation for as long as you want. But my partner had another problem that needed the attention of doctor Jesus.

After leaving the military he returned as a civilian and had close calls with a mortar explosion and an IED that gave him a few scars. He said he would have gone back in the military if he hadn't partially torn his Achilles's tendon, which made it hard for him to run. The VA wanted to do surgery to try to repair it, but he decided to live with it the way it was. I told him he would be healed before the end of our shift because God was in a good mood and He loves to heal people.

Just before the end of shift, we posted at a hospital. I told him to get out. It was time to be healed. We walked to the back of the ambulance and I had him to put his injured foot on the rear bumper. I asked if there was any pain. He said it didn't hurt unless he ran. I had him flex his foot as far as he could. "Okay, that hurts", he said.

I said, "Watch carefully, because one day you're going to be doing this for other people." I placed my hand near his heel and asked the Holy Spirit to bring his presence. I commanded the tendon to reattach to the heel bone and asked what he felt.

"That's God healing you. Flex it again and tell me if it hurts". There was a little pain, so I repeated the process and asked what he felt.

"Dude, that's the kingdom of God."

I gave him a card to the website and told him to e-mail me and let me know how the healing went with his foot. He said he'd go out for a run and get back to me. If he sends word, I'll let you know.


Updated on 11/1/11 - I ran into the EMT today at work and talked with him about how he felt. The back pain never returned. I asked about his Achilles tendon. He said he did some hiking on Camelback mountain after we prayed and he had no pain or problems with it. He's still amazed at the healing and telling his partners about the miracle.