"My Head is Tingling"


In the eyes of most paramedics, there’s little glory in transferring depressed, intoxicated patients from one hospital to another for mental health evaluations. These aren’t the calls we tell our friends about when we get together, unless it’s to make derogatory comments about the patients.

Shania had been in Phoenix just long enough to develop a nice tan. Like me, she’d moved here a month ago. She lost her job and boyfriend and having no support system, she moved here and was living with her best friend. But her old pals, depression and suicidal thoughts moved with her and they paid her a visit yesterday. After a hellish 24 hours, we showed up to take her somewhere else.

After the introductions, we loaded her in the back of the ambo.
(That’s what they call it here)

I got the formal questions out of the way and had most of my charting done after a few minutes. I wanted to spend most of the trip learning about her problems and perhaps get the Holy Spirit involved.

After learning we were both new to Phoenix, she told me she was from San Jose, which made me think about friends from the Bay area who do street healing. A lot of the people involved with Revival or Riots are from there. I told her about how they go to malls, stores and occasionally emergency rooms healing people. She wanted to hear more.

I shared some history of the healing movement in northern California then about ten minutes of stories from my own archives. Her curiosity grew and she thought about her mother who had a lot of medical problems, who lived in Jan Jose. She asked for contact information for Revival or Riots. I wrote their info on the back of a card for this website. I told her about this blog and told her she could e-mail or find me on Facebook if she had questions.

I asked if she had any pain. She said she has fibromyalgia. I told her what Joan Hunter learned about it and asked if her symptoms began after a traumatic event. “Yeah – I was in a very abusive relationship and right after it ended, I began having pain.” Joan believes that fibromyalgia is a manifestation of the spirit of trauma that attacks people after traumatic events. She's had great success in healing people of it.

I asked if I could pray with her. She smiled and said, “sure”.

I placed my hand on her shoulder and asked the Holy Spirit to bring His presence into the ambulance and touch her. I asked Him to heal her memories and remove the thoughts that tormented her. I commanded the spirit of trauma to leave and commanded pain and inflammation to leave in the name of Jesus. I asked if she felt anything.

“My head is tingling.”

I asked if she felt tingling anywhere else.

By this point she was crying tears of joy, knowing that God was touching her. I told her I believed the tingling was God’s way of healing her mind, emotions and memories.

All our senses; sight, sound, smell, taste and touch (including pain) travel along nerves in our body. The nervous system is like a bundle of electrical wires, carrying impulses through millions of cells strung end to end. These cells are called neurons and below is an image of one, that's been color enhanced. 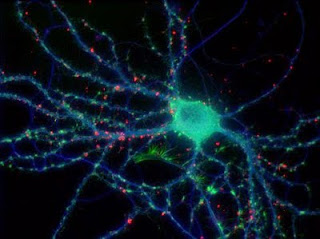 When the power of God goes through a part of our body, wouldn't we expect our own electrical system be affected by that power and send signals to our brain letting it know something is happening? I believe this is why so many people feel tingling when God is healing them.

We were almost at the destination, so I spent the rest of the trip teaching her about the battle to keep her healing. I told her that if the symptoms left, they might return and that the enemy might try to convince her she wasn’t healed. I told her my faith could get her healed, but her faith would keep her healed and that she needed to stand by faith and believe God healed her and command the symptoms to leave if they ever came back.

We arrived and unloaded the gurney and wheeled her inside. Before I left, she gave me a hug and thanked me for caring about her. I told her to e-mail me if she had any problems.

I don’t know. But I do know she was touched by God and that’s what matters. I introduce them to God, and the Holy Spirit takes it from there.

I didn't see the old men depression and suicide during the trip. They come in through open doors. Like uninvited guests, they see an opening and come around to harass defenseless people. In fact, they enter our lives because there is no door to keep them out. Just a big hole in our life that leaves us vulnerable to every attack of the enemy.

When the door shows up, that hole in your life can be closed off to intruders like fear, depression, worry, anxiety, guilt and shame. Jesus is our only defense against them.

Shania knows that Jesus is real and that He cares about her. Maybe she'll learn that he's her door of safety, too.

Most medics don't see the glory in psychiatric transfers because they're looking for something that glorifies them. If you want to be a hero, you need to show off your skills. Healing doesn't require skill and it doesn't bring glory to us. It brings glory to God and it's not our skill, but His power on display. Some people don't like others others being in the spotlight. But I'm cool with it. My only hope of glory is that Christ will be formed in me.

If Shania send word that she was healed, I’ll let you know.

Email ThisBlogThis!Share to TwitterShare to FacebookShare to Pinterest
Labels: fibromyalgia