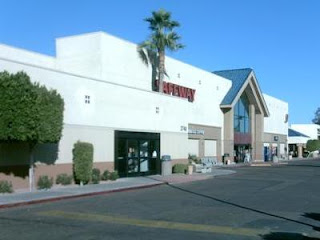 We went out last night for a drive and stopped at Sonic for dinner. I love their coney dogs. On the way home we stopped at Safeway for groceries. At the check stand, I saw a familiar Face.

When we first moved to Mesa a month ago, we met Byron at the same check stand. I struck up a conversation with him then about the immobilizer on his left wrist. I asked if he'd considered having anyone pray for it to be healed. His reply came from a man who had to be a Christian. But there was a line of customers and I didn't want to delay them, so we left. Until tonight. And there was almost no one else in the store.

"It's going to take me a minute to enter all this with my right hand, so I appreciate your patience", he said as he rang up our stuff.

"Well, why don't we get your left hand healed so you can use both of them", I replied.

I finished his sentence, "That mountain will be tossed into the sea."

I'll admit it. I wasn't feeling like taking the safe way tonight. I was feeling extra-bold.

"Byron, why don't you let me get your wrist healed tonight."

"What did you have in mind?"

"Let me pray over it for you. It should take about ten seconds."

He agreed, but by now there was a customer in line behind me, so I offered to pray after he took care of them. I waited with my daughter and wife. I asked the young lady who was helping Byron if she'd ever seen a miracle.

OK, she had me there.

"What I meant was, have you ever seen a miracle of healing?" She said she had not.

This naturally made her ask what I had planned. "So do you know some kind of trick or something?"

"I know Jesus and He heals people everywhere I go."

If you're wondering why I can be so confident in the area of healing, it's not because I have some ability or knowledge of my own. It just the fact that I've seen the work of Jesus heal so many people of the exact same thing, I no longer have any doubt that carpal tunnel will be healed. God's faithfulness has given me faith that allows me to boldly tell people they're going to be healed.

Byron came over. I confirmed his diagnosis and asked how bad the pain was. I told the few people gathered around that Jesus still healed and because it was Him doing the healing, it's actually very easy.

I asked the Holy Spirit to come in and commanded the carpal tunnels to open, for ligaments, tendons and nerves to be healed and the spirit of pain to leave then asked what he felt. He said he felt pressure in two of his fingers. I explained to the group that in healing, after you command the healing to happen you should check the progress. I commanded the healing one more time then asked what he felt.

We rejoiced together and I gave one of the employees a card to this website and told her to e-mail me if she had any prayer requests.

I know I'll see Byron again. If he's having problems keeping his healing, I can teach him how it works and maybe send him here for some info.

That's how we make disciples.